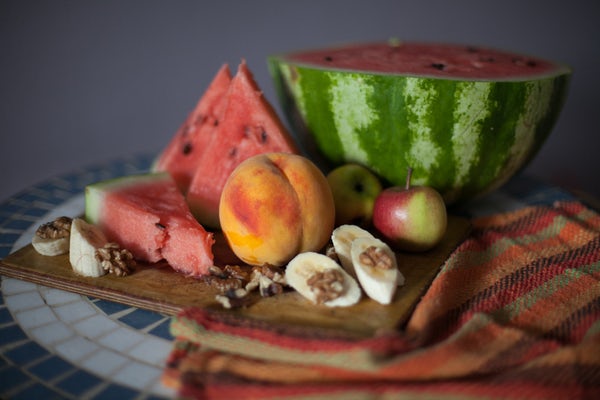 It is commonly understood that monks are not supposed to be choosy about their food and should eat whatever is given to them. Is that in accordance with the Buddha’s instructions? Let’s see what VEN KUMARA BHIKKHU has to say.

I found an interesting quote on a health website. It is supposed to have come from a hieroglyph found in an ancient Egyptian tomb. It says: “One-quarter of what you eat keeps you alive. The other three-quarters keeps your doctor alive.”

While I cannot be sure how true that was then, it seems to hold some truth now considering the eating habits of the many in modern society. Perhaps only one quarter of what people eat now is really good and necessary for them. The question is “Which quarter?” Ven Aggacitta believes he has found his answer to this.

If you have been with Ven Aggacitta some time in the past one year or so, you might have seen him dangling a pendulum over offered food. If you, like most people, were not familiar with the use of pendulums, you might have asked, “What’s Bhante doing with that thing?”

If you were curious enough, you might have approached him and asked what in the world he was doing, or eagerly joined in if someone else had asked. Then you would have probably heard his explanation that he was using it to determine whether a particular food was suitable for him. If it goes clockwise, it means yes. If it goes the opposite way, it means no. Plain and simple.

Now, if you were sophisticated enough to ask further about how it works, he might tell you that it is based on a natural law of bioresonance1 explainable by quantum mechanics. Ahah… So, now you can understand. (If not, please see text box.)

Under normal circumstances, he would eat the ‘yes’ food and set aside the ‘no’ food, untouched. If this pendulum-dangling business is done privately, then no issues would arise. However, if it is done in public, when the donors are around to see if the venerable eats their food, that is where some ‘feelings’ may arise.

After one of Ven Aggacitta’s recent Dhamma tours, someone very politely questioned him through email about his ‘eating ritual’, whereby “some food would inevitably end up being accepted whilst others may end up being rejected.”

Looking at how the questions were phrased, I speculate that there might have been at least a bit of stress during or after a dana session that the writer participated in. After some gentle lead-in to the issue, he asked

Are monks not supposed to accept the foods that are offered with good intentions by lay devotees?
Is being so meticulously concerned with food suitability contrary to the Dhamma?
Isn’t our life also affected by other factors like kamma, etc. apart from food?
Wouldn’t such meticulous testing give an impression to the laity of extreme practice compared to the middle path as propounded by Lord Buddha?

Such questions must have arisen many times and it’s only now that someone is willing to voice it, so that we may explain with a reply. For that, we are grateful.

In his reply Ven Aggacitta, after thanking the devotee, said

A monk should be easy to support, i.e., he should not be choosy about what is offered to him. In other words, he should accept whatever the Buddha allowed the faithful to offer to him. After having accepted what has been offered, he should select and partake of what is suitable for health and the practice of the holy life.

Reflecting wisely, you should take food neither for amusement nor for intoxication nor for the sake of physical beauty and attractiveness, but only for the endurance and continuance of this body, for ending discomfort, and for assisting the holy life, considering: “Thus I shall terminate old feelings without arousing new feelings and I shall be healthy and blameless and shall live in comfort.”
From GanakaMoggallana Sutta (MN 107),
trans. by Bhikkhu Bodhi

“Old feelings” probably means hunger, and maybe some other possible feelings too, but what does “new feelings” mean? It does not say. However, by common experience, we can understand that it could include a wide range of feelings including that of overeating, indigestion, stomach ache, heat, cold, headache, and any other form of pain or discomfort.

So, following the Buddha’s instruction, we are to eat to quell our hunger, and perhaps other feelings due to ill health (considering that the right kind of food can be medicine), while being careful not to create “new feelings” of any kind, which can arise due to eating food that is plainly unhealthy, or unsuitable to the individual, be it chillies, coffee, brinjal, cheese cake, guava, pork, glass, or whatever else.

There are many systems of determining what is suitable for healthy consumption: Ayurveda2, macrobiotics, blood type, Chinese traditional medicine, ‘modern’ mainstream nutrition, etc. Being rather lazy to figure out which is the best for me (as there are so many variables to consider), I just use the pendulum based on the principle of bio­resonance which intuitively takes into consideration all variables at the point of time that it is used. This really demands a high degree of discipline because the mind must be maintained in neutral mode, otherwise the pendulum will be influenced by one’s likes and dislikes.

Should not we be more concerned with health rather than likes and dislikes, be that of the eater or the giver?

Furthermore, while in the past one probably only needed to be concerned with suitability and amount, these days healthy eating has become much more complicated due to the many so-called ‘modern’ farming, processing and cooking methods that can be detrimental to the body. So, among the many kinds of food kindly offered, would not it be better for monks to choose those that may be conducive to their health, regardless of whether he uses a pendulum?

By being heedful of the Buddha’s instruction to eat properly, we will be in better health to learn, practise, realise and teach the Dhamma. I’m sure our kind devotees, wishing for our well-being, would agree.

To our devotees—we are grateful to you who have been so kind to us. We accept whatever the Buddha allowed us to accept, and hope that you will rejoice regardless of the food choices that we make.