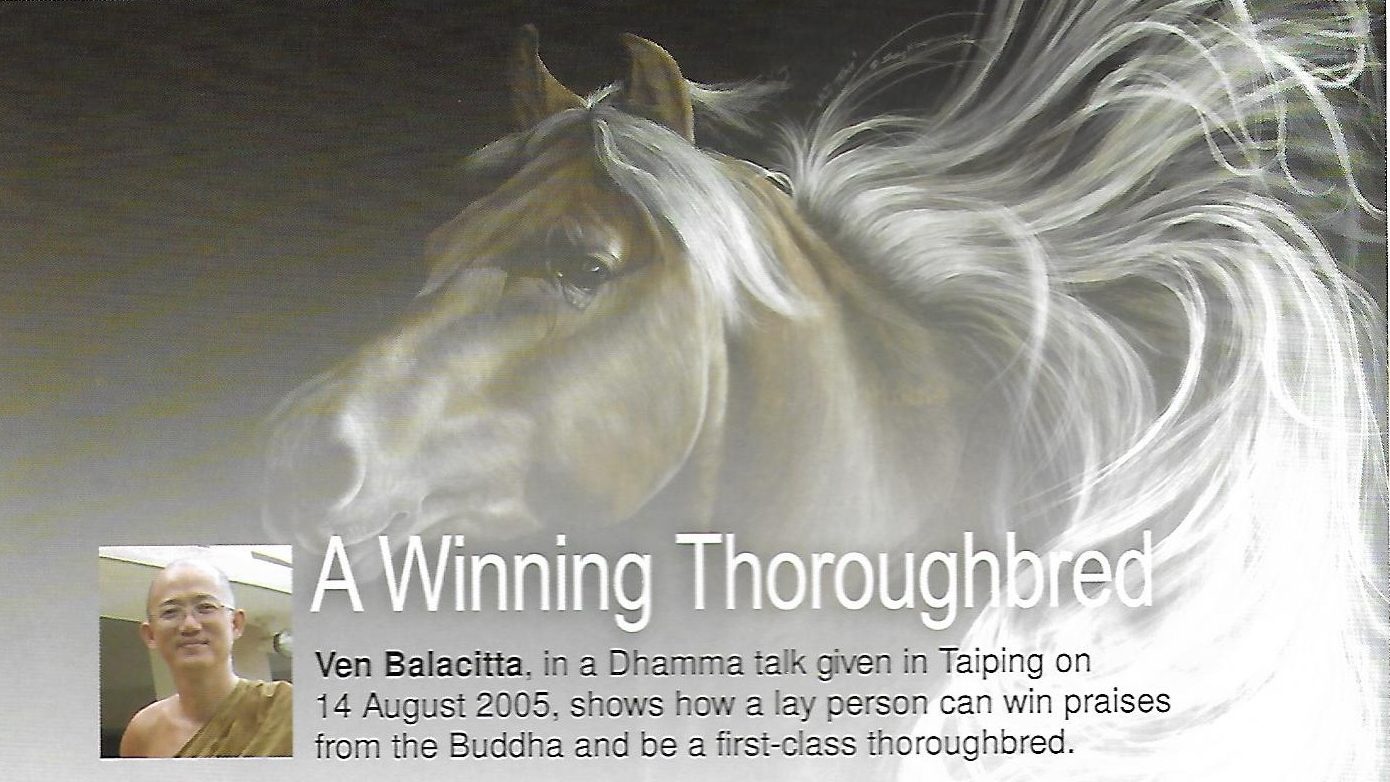 Ven Balacitta, in a Dhamma talk given in Taiping on 14 August 2005, shows how a lay person can win praises from the Buddha and be a first-class thoroughbred.

As part of my preparation for today’s talk, I practised breathing (anapanassati) meditation as it helps to clear and sharpen the mind. This then allows the mind to be more attentive to the task at hand—to prepare an organised and well-prepared talk that will benefit its listeners. When I was a layman, I used to smoke two to three packs of cigarettes daily and this would increase in times of stress. Anapanassati is in a way similar to smoking cigarettes: breathe in… breathe out… breathe in… breathe out…. But it is a whole lot healthier!

Today I will give a talk on how to win praises from the Buddha himself and be a thoroughbred—based on Rasiya Sutta (SN 42:12) and Patoda Sutta (AN 4:113).

Let me first brief you on the possible background to the first sutta. Devadatta, a cousin of the Buddha, was looking for ways and means to take over the Buddha’s position as leader of the Sangha. After some failed attempts, which included trying to kill the Buddha, he proposed five things to the Buddha to be included in the rules for monks. Monks are to, for life:

1. dwell in the wilderness and not stay in a lay residential area
2. eat only food gathered from alms rounds and not accept meal invitations
3. wear robes made from discarded pieces of cloth only and not accept robe cloth from householders
4. stay under a tree and not enter a roofed dwelling
5. abstain from eating fish and meat.

The Buddha with his mind-reading ability was fully aware of Devadatta’s true intention. He replied that, with regard to the first three things, the monks are allowed to choose either way respectively as they wish. Staying under a tree is allowed during the eight months outside the vassa period. The consumption of fish and meat is also allowed depending on how the food is obtained—it must be pure in three ways, namely that the monk must neither see nor hear the animal being killed, or suspect it to be killed specifically for his consumption.

Devadatta probably knew beforehand that the Buddha would not approve these new rules. He was quite delighted by the Buddha’s response. With that he intended to establish his own Sangha that would be more austere in these ways so that it would impress the laity and thus gain more support from lay people. This led to the first schism of the Sangha. Soon after, the news spread and some thought that Devadatta’s group of monks were more austere while the Buddha himself was indulgent.

A village headman by the name of Rasiya, approached the Blessed One, paid homage to him, sat down to one side, and said to him: “Bhante, I have heard people saying, ‘The ascetic Gotama criticises all austerity. He categorically blames and reviles any ascetic who leads a rough life.’ Do those who speak thus, Bhante, state what has been said by the Blessed One and not misrepresent him with what is contrary to fact? Do they explain in accordance with the Dhamma so that no reasonable consequence of their assertion would be open to criticism?”

The Buddha replied that those who spoke thus did not state what had been said by him but misrepresented him with untruth and falsehood. Instead, he taught all monks that two extremes should be avoided:

• The pursuit of self-mortification, which is painful, ignoble and unbeneficial, for example, almost or totally abstaining from food or sustenance.
• The pursuit of sensual happiness in sensual pleasures, which is low, vulgar, ignoble, unbeneficial and the way of worldlings.
In other words, the Buddha discouraged both self-mortification as well as sensual indulgence. In its place, he encouraged the Sangha to follow the Middle Path, i.e. the Noble Eightfold Path, which gives rise to vision and knowledge, which leads to peace, to direct knowledge, to enlightenment, to Nibbana.

Unlike monks however, lay Buddhists can still blamelessly enjoy sensual happiness so long as they do not go overboard and break their precepts in the process. However, they will need money to be able to do this. This can be obtained through lawful or unlawful ways.

In Rasiya Sutta, there is an indication that shows how people who gain wealth unlawfully are able to balance their non-praiseworthy actions with praiseworthy actions such as making themselves happy and pleased, sharing the wealth thus gained with others and doing meritorious deeds with it.

So for example, a person who gains wealth unlawfully but who makes himself happy and pleased with the use of wealth, further shares his wealth with others and does meritorious deeds, is criticised on the first ground, but praised on the second and third.

For one who acquires wealth lawfully, uses it for her own benefit and further shares it with others, but when she uses it she remains tied to it, blindly absorbed in it, not seeing the danger of this attachment and not understanding the escape from it, she is to be praised on three grounds but criticised on one.

The best example of a householder who enjoys sensual pleasure is one who is praised on all four grounds, i.e., not only does he acquire wealth lawfully, uses it for his own benefit and further shares it with others, but also he uses his wealth without being tied to it, not blindly absorbed in it, seeing the danger of this attachment and understanding the escape from it.

Some of you might be amassing possessions or wealth through unlawful means whereby you need to hide your activities and work like a mouse in order to evade the authorities. It may make you materially rich, but cannot give you peace of mind. But if you know how to make yourself happy and pleased with that wealth thus gained, share it and do meritorious deeds with it, at least you can win more praise than criticism. More importantly the praise is from the Buddha and not from any Tom, Dick or Harry whose teaching may lead you to become greedier, more hateful and more deluded.

This is my understanding of what the Buddha teaches in this particular sutta. May all of you take care of yourself wisely and be a winner of those praises.

THOROUGHBREDS
In Patoda Sutta (AN 4:113), it is mentioned that there are four types of good thoroughbred horses found existing in the world:

May all of you be the first-class thoroughbred person and make yourself well-prepared in facing the certainty of sickness and death. So, always be mindful and remember that money never follows you to the hereafter—but kamma certainly will.