Dialogue on Copyright Infringement and Vinaya 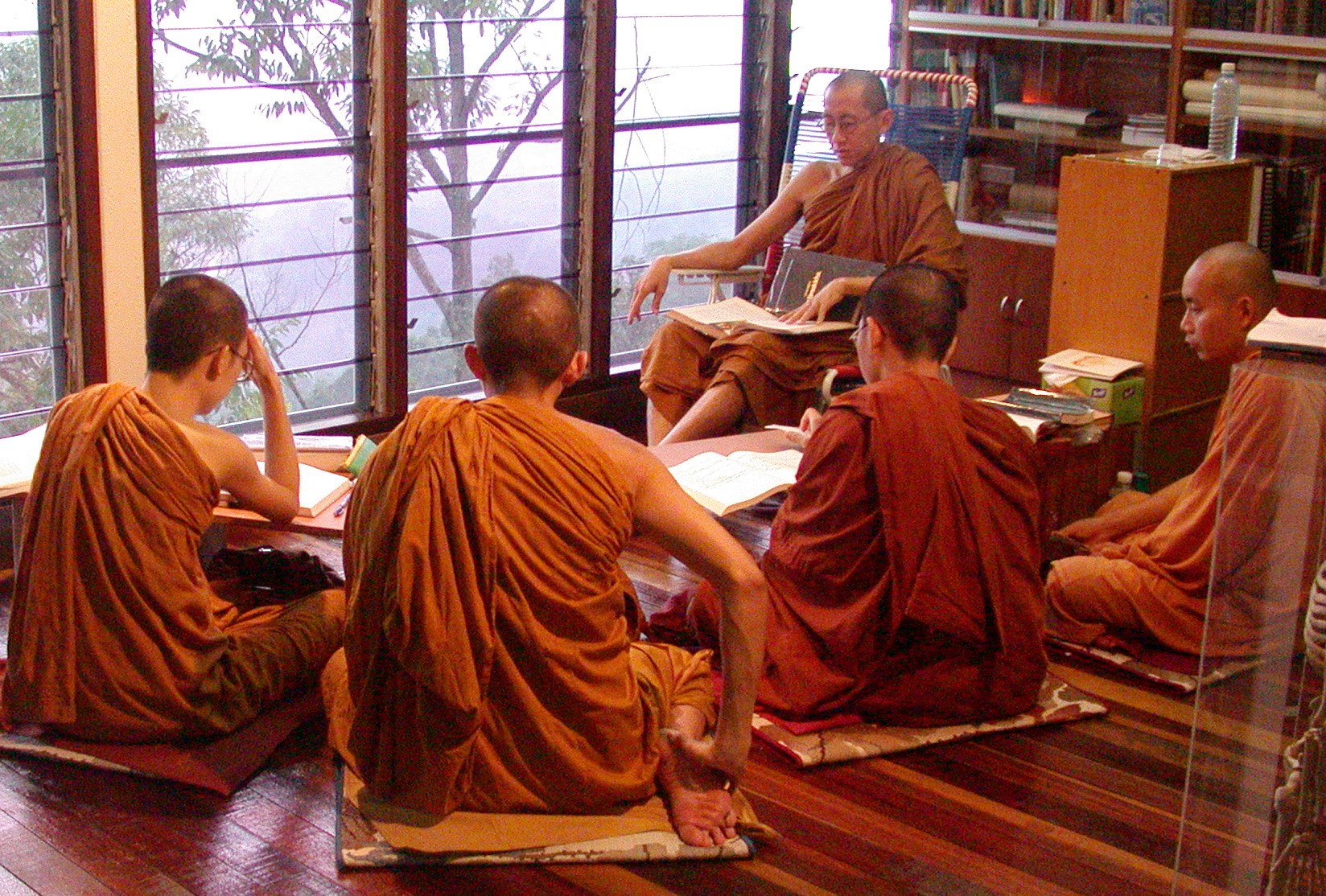 After receiving Ven Varado’s article “Copyright Infringement and Vinaya”, Ven Kumara, Ven Aggacitta and Sasanarakkha’s editor took the opportunity to discuss the matter with the author. Here is the outcome of their email correspondence, which has been edited to make it more intelligible and conversational.

Ven Kumara: When discussing this matter, I’m reminded of the case in the vinitavatthu of Parajika 2, where a monk, for a fee, smuggled a taxable jewel across the border. So, here too nothing physical was stolen, but it was accordingly judged by the Buddha as parajika. What do you think of this?

Ven Varado: Tax is money that is owned by the government. It is not a fee that is owed to it. Likewise, when goods are imported, the government automatically has a part share in them. In paying import tax, importers are buying back the government’s share of the goods. Smuggling is therefore a form of theft: taking the government’s portion without paying for it.

VV: No. It is using a service without paying for it. Emotionally it may feel like theft, but how can it be theft when nothing gets stolen? Unlike physical objects, infor¬mation is not something that can be personally owned. A car can be owned, but not the design of a car. If someone copies a design of a car, there are then two cars; but there are not then two designs. The car can be stolen, but not the design. Similarly, books and CDs can be owned, but not the information on them. The concept of ‘stealing information’ is simply an illusion. Thus infringing copyright should not be seen as theft. Neither should plagiarism, which, unlike copyright infringement, is a form of lying. (see insert p14)

VK: I suppose it feels like theft mainly because we’ve been bombarded with media reports saying that it is theft. What about sneaking in to watch a movie in a cinema? Would that be equivalent to watching a movie that has been pirated onto a DVD? What about stealthily using a pay-toilet without paying? Would that be stealing the fee that one should have paid?

VV: Using a service without paying for it is sometimes theft, sometimes not.
Sometimes, using a service without paying for it can be compared to taking others’ possessions temporarily. The Buddha said, “There is no offence in taking for the time being” (Vin 1.65). What would the vinaya offence be for a monk who illegally borrows a chainsaw from a hire shop? It would be no offence, though under law it is obviously illegal.

Sometimes using a service without paying for it, where it involves wastage of others’ property, can be compared to arson, which is a dukkata offence (Vin 2.138; Vin 3.65), e.g. setting off fire extinguishers for fun, flushing all the public toilets, or turning on all the taps.

Sometimes using a service without paying for it is theft, even just taking someone else’s water (Vin 3.65). Taking paper towels from a public toilet without permission seems similar. Using a telephone without permission is theft because it is equivalent to taking money from the owner’s pocket and giving it to the telephone company. But remember, the Word Analysis to Parajika 2 says that taking counts as theft only if it involves theyyacitta, a thieving attitude.

Downloading an electronic file is not theft; it is copying of information. Unlike physical objects, information is not something that can be personally owned. Watching a movie without paying fits into this category: consuming infor¬mation. Nothing is really stolen.

I appreciate your questions very much. You must keep asking until you are sure.

VK: Thank you for your answers. It has certainly helped me to understand the matter better.

Ven Aggacitta: You said, “Fraud is illustrated in the vinitavatthu (Vin 3.59) where monks, when food was being distributed, claimed food for non-existent monks. The Buddha declared this to be an offence of pacittiya for lying, not parajika for theft.” However, in that case the food was meant for the Sangha; and the fraudulent monk, being a member of the Sangha, claimed food for a non-existent member. Can this principle (that obtaining goods by fraud is not parajika) be aptly applied to the case of copyright infringement where the beneficiaries are totally unrelated?

VV: I used the example of fraudulently claiming food to demonstrate that conduct ‘tantamount to theft’ is not necessarily theft. The example does not mean that because bhikkhus are part of the Sangha, they may steal from the Sangha. It simply shows that stealing by means of fraudulence is an offence of lying, not stealing.

VA: You said, “So, for monks vinaya is not a replacement for law but an addition to it, a fact established in vinaya where the Buddha, referring to the legislative system of the day, said, ‘I allow you, monks, to obey kings (Vin 1.138)’ ”. How¬ever, this allowance for obeying kings was given in the context of a request for a postponement of vassa by King Bimbisara who sent a messenger to ask the bhikkhus if they could enter the vassa the next full moon day; the matter was reported to the Buddha, who then allowed the monks to comply with the king’s request: “anujanami bhikkhave rajunam anuvattitum.”

The infinitive anuvattitum can have different shades of meaning, such as “to obey”, “to follow”, “to conform”, “to comply”. I think that in this particular context the implied meaning is “to comply with the king’s request”. I also feel that it would be too sweeping to claim that the Buddha was “referring to the legislative system of the day” when he made this allowance.

VV: Yes, one should not wildly extrapolate from a single phrase. However, there are many examples where the Buddha used his diplomatic skills in regard to kings. When King Bimbisara, out of faith, proclaimed that bhikkhus should not be prosecuted for crimes (Vin 1.75), even then, the Buddha did not take advantage of the situation; in fact, he prohibited jail breakers and wanted criminals from receiving upasampada (bhikkhu ordination). He established several Patimokkha rules specifically to support friendly relations with kings (e.g. Pacittiyas 83 and 57) and he prohibited those in the king’s service from joining the Sangha (Vin 1.74). Thus, the phrase “I allow you, monks, to obey kings”, can probably be taken as representing the Buddha’s general attitude to legal authority.

VA: You said, “Emotionally it may feel like theft, but how can it be theft when nothing gets stolen?” But in the story to Parajika 4 , the Buddha describes five kinds of thieves who also steal, but without taking anything material. Perhaps you should make it clear that you are not talking about theft in that sense.

VV: Yes, those five cases of “theft without taking anything material” all involve stealing reputation by deceit-either a good reputation for oneself, or stealing a good reputation from another monk by maligning him. Hopefully people will see that our discussion is in the context of Parajika 2, where theft is defined as stealing a physical object.

VA: I’d like to further the discussion because I think we can draw some important clues from it. In that story the Buddha said that there are five great thieves:

1. A monk who tours around with a large assembly of monks, craving honour and support from laypeople.
2. A monk who claims that the Buddha’s teaching is his own. [This is plagiarism, which is quite distinct from copyright infringement. (see insert on next page)]
3. A monk who falsely accuses a chaste practitioner of the Holy Life of unchastity.
4. A monk who makes use of ‘heavy’ property belonging to the Sangha to bribe laypeople and court their support.
5. A monk who falsely claims superhuman spiritual achievements; he is the foremost of them all because he has eaten the people’s alms food through thievery.

It is interesting to note that these forms of theft were not discussed under Parajika 2 but under Parajika 4, which deals with lying and fraudulence; and that although they were all condemned by the Buddha, only the last form entails parajika—which is committed not when he receives or eats the people’s alms food (i.e., stealing something physical), but when someone understands his claim.

Sasanarakkha’s editor jumps on the bandwagon to pose a question from a lay person’s point of view:

Editor: Bhante says that acts of copyright infringement of categories (1) – (4) (copying for one’s own benefit) is dukkata for monks; for the lay person they are not criminal offences but may subject the ‘offender’ to a civil suit against him. My question is: How does Bhante see these acts in the light of the second precept of not stealing, for the lay person?

VV: In the five categories I mentioned, both categories (4) and (5) are in fact criminal offences. Category (1) is allowed by law. Categories (2) and (3) are, broadly speaking, wrong, and should not be done; but they are not criminal offences according to de Freitas, the copyright expert I quoted above.

Laypeople should be as scrupulous about observing copyright restrictions as any of the precepts. Doing this leads to beautiful self respect and self-esteem, a sense of inner purity. This is precious. Obtaining something by shameful means is not precious.

My attitude to copyright can be illustrated like this: if I find a booklet in the library which I would like a copy of, though I might feel tempted to photocopy it, I would not do it; if I did, I would have infringed copyright, I would possibly have committed a dukkata offence, and I would never enjoy reading the photocopy.

Alternatively, I could ask the author for permission to photocopy it; but I would feel uncomfortable doing this without prior invitation. So, my choices are either having a lay supporter buying me a copy (which is the aim of copyright law) or doing without.

The main point of my article, however, is that if craving gets the better of me, as it might, and I illegally photocopy the booklet, I am not guilty of a parajika offence. I feel it is important for the Sangha to understand this, because confusing light and heavy offences is blameworthy:

Monks who explain that a light offence is heavy… a heavy offence is light are practising for the loss and misery of the manyfolk, the loss, injury and misery of gods and men. Moreover, they beget much demerit and cause the disappearance of true Dhamma. (AN 1:152,153; combined)

Editor: Thank you for your lucid clarification on my question. You’ve made it very clear that infringement of copyright is morally wrong and should not be condoned.

Plagiarism and Copyright Infringement: what’s the difference?
Extracted from http://www.sckans.edu/library/plagiarism.htm*

What is plagiarism, anyway?
Plagiarism is the use of someone else’s work without giving that person credit, passing off their work as your own.

Owning a copyright is like owning water rights. The material itself (e.g. the words in the song lyrics, the drops of water in the river) isn’t actually owned. Instead, the person who owns the rights to the material determines who has access to the material and under what conditions.

In general, any person who produces intellectual work owns the copyright to the work, whether the person marks it with a copyright symbol or not. Adding the symbol,© , helps to remind people that unauthorized reproduction is copyright infringement. Copyright infringement is illegal, and can result in both prosecution and civil lawsuits.

© Dr. Beth Sheppard and Dr. Delilah R. Caldwell, 2005. This material can be used and reproduced freely, but we expect to be properly cited.