Offerings to Honour the Dead 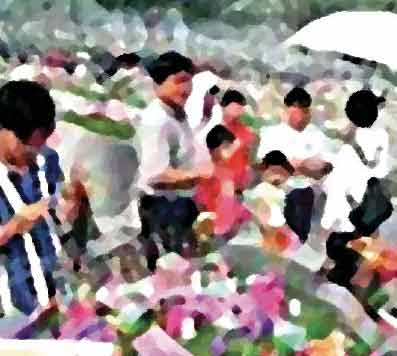 There are different views on the custom of making food offerings at the graves of their departed relatives during Cheng Beng. Does this practice bring any benefits?

Some people say that Buddhists should not offer food to their departed relatives as it is not a Buddhist practice. Instead they should invite the Sangha, make offerings to the Sangha and then transfer merits to the departed relatives. Is this true? Let us investigate by scrutinising some relevant suttas.

The tradition of offering food at the graves of ancestors was practised even during the time of the Buddha. There is a story in the Vinaya Pitaka (Pac 40) of a bhikkhu who, being very austere in his practice, used only the shrouds of corpses for his robes and ate only food offerings found in the charnel ground, a sort of cemetery where corpses were left to decompose. Naturally, the food offered by relatives to the dead was good food, so he looked healthy. Then rumours circulated that he might have consumed human flesh! When the Buddha heard the complaint, he set the rule that food must be offered to the monks before they could eat it. That is why monks have to wait for food to be offered to them before they can consume it, not because they are high and mighty and need to be served. So, during the Buddha’s time, it was already an Indian custom to make food offerings to departed relatives.

Offerings Include Food and Drinks

The Tirokutta Sutta (Khp 7) describes the circumstances of departed ones with special reference to their living relatives. We recite this when invited for dana on the occasion of a family bereavement. The sutta states that living relatives should make offerings of food and drinks to the departed ones. In this same sutta, there is also a reference to offerings made to the Sangha.

~ condition of opportunity:
o those who do evil and hold wrong views and are reborn in the realm of ghosts.

It is clear here that dana can only reach the deceased if he is reborn as a ghost.

In this sutta, we learn three important points:
o The dana given by the living to the deceased cannot reach him if he is born in hell, in the animal kingdom, in the human world or even in heaven.
o The dana can only reach the deceased if he is born in the realm of ghosts.
o Dana here has to specifically mean offering food and drinks to the departed relatives, since this dana cannot be received by a departed one reborn as a deva. It cannot mean transference of merit because this other type of dana can reach a departed relative born as a deva, who benefits by feeling honoured (as we shall see later).

According to a parapsychology study in Myanmar carried out about twenty years ago, some children could remember their past lives as hungry ghosts. They remembered consuming filth such as sputum, faeces and urine. They were also able to eat discarded food but needed only a single grain of rice to be full.

When I was young, I often fell sick due to supernatural causes. I could not be cured (by Western medicine) until my mother went to the temple to consult the medium and then made offerings to the unseen beings at the roadside. This custom is practised in Myanmar too.

These and many other contemporary experiences seem to suggest that some ghosts or unseen beings can actually partake of food and drink. Some people even say that these unseen beings do so by “sucking” the qi (essence) of the offerings; that’s why food that has already been offered tastes rather flat!

Offerings to Devas as well

In Pattakamma Sutta (AN 4.61) the Buddha said to Anathapindika that a noble disciple who acquired his income through righteous means should spend it by making five types of offerings. These are offerings to
o living relatives
o guests
o departed relatives
o the king (government)
o devas.

There is also a verse in Ratana Sutta (Khp 6) that urges deities to protect humans because they make offerings to them day and night.

The above references bring us to the following conclusion: a Buddhist is actually encouraged by the Buddha to make offerings to departed relatives as well as to devas.

Dedication of Offerings to Devas

In the story on the making of Pataliputta village found in Mahaparinibbana Sutta (DN. 16), the Buddha advised people to offer dana to virtuous monks and dedicate the offering to the devas there. We do the same when we are invited for dana in a new house. These devas, being honoured and cherished, will honour and cherish the occupants of the house in return.

This shows that a smart person who invites virtuous and restrained Sangha members for dana and then dedicates the offering to the guardian devas in the dwelling can be protected and assisted by the devas. So, dedicating one’s merits to devas is also a practice encouraged by the Buddha.

One may ask, “What’s the point of making offerings to departed relatives or to devas if they can’t eat the food?” Several points need to be considered here.

2. As the Buddha said in Janussoni Sutta, even if the departed relative was not born there, other ghosts who were related to one in previous lives could eat the offerings.

3. Devas may not be able to eat the food, but they will probably feel honoured by the offerings and reciprocate by giving protection and assistance.

People make offerings of food, drinks, flowers, incense, etc. to the Buddha image. Can the Buddha eat or appreciate the offerings? Obviously not. So, what’s the point of doing such puja (worship)? I think it is the mental attitude that counts. Worshipping those who are worthy ofworship and respect are lofty blessings listed in the Mangala Sutta (Khp 5; Sn 2.4). So, whether or not one’s offerings are appreciated or used by the recipient does not affect the validity of the wholesome kamma of doing puja.

We should take note that the actual procedure of “transferring” or “sharing” merits is not mentioned in all the suttas I have referred to so far, nor in any other sutta in the Pali Canon that I am presently aware of. “Should dedicate the offering” (dakkhi namādise) seems to be the nearest hint found in the Pataliputta story (DN 16).

According to the Commentary to Tirokutta Sutta, however, a few factors decide whether the merits thus dedicated can be received by the departed relative:
o The donor must think of the deceased and dedicate the dana to the deceased.
o The dana recipient must be virtuous.
o The deceased must rejoice in the dedication of merits (e.g. by saying, “Sadhu! Sadhu! Sadhu!”).

The commentary argues that the merits done by one cannot be transferred to another because the law of kamma states that beings are the owners of their own kamma. However, by rejoicing in another’s meritorious deed, one is creating wholesome kamma for oneself. In the case of a departed one reborn as a deprived ghost, rejoicing in the dana dedicated to him can give immediate relief and other benefits, particularly if the dana recipient is virtuous.

A Buddhist son may choose to have a “pure Buddhist” funeral for his departed Taoist father. Now, even if the deceased was aware of the dedication of the Sanghadana, he might not be happy or rejoice because the funeral was not conducted in the Taoist tradition. So, according to the above conditions, he cannot receive the merits, can he?

On the other hand, if the funeral was conducted according to his personal preference, do you think he would be happy? If he rejoiced in his family’s act of filial duty as recommended by the Buddha in Sigalovada Sutta, Pattakamma Sutta and    Tirokutta Sutta, would he be creating wholesome kamma that could also give immediate benefits? Think about it.

Other Ways of Sharing Merits

Apart from the dedication of offerings to devas as mentioned in the suttas, and to departed ones as explained in the commentaries, there may also be other ways of sharing merits, as the experiences of contemporary Buddhists imply. There is one real-life story (see The Story of Old Man Tiow by Sichitra Ronruen) that happened in Thailand not too long ago. An irreligious old man was killed and landed in hell. But because of his son, who was a meditating monk, he came back to the human world for a new lease of life.

How did the monk save his father? He did not do any dana. All he did was meditate then dedicate the merits to his father. And the father was not even aware of the dedication, not to mention rejoicing in it. But he was saved anyhow. This does not seem to be in line with the commentary’s conditions for the efficacy of sharing merits. How can we interpret this apparent inconsistency?

According to Luang Phor Jarun (Phra Rajsuddhiñanamongkol, author of The Law of Kamma), after meditation, one’s mind is very clear and powerful. Hence, contrary to the commentary’s argument, people and other unseen beings can receive merits that are dedicated to them after meditation, although they may not even be aware of the sharing.

So, it seems that we can transfer the merits not only from dana but also from any wholesome act, such as meditation.

Based on the above investigations into the suttas, I would like to propose the following interpretation with respect to offerings to departed relatives during Cheng Beng. We can make two types of offerings: the direct offering of food and drinks to the departed ones, and the dana to the Sangha followed by sharing of merits.

Note: This article will be expanded into a more comprehensive work tentatively entitled Honouring the Dead – a Buddhist View to be published for free distribution in three languages in the near future