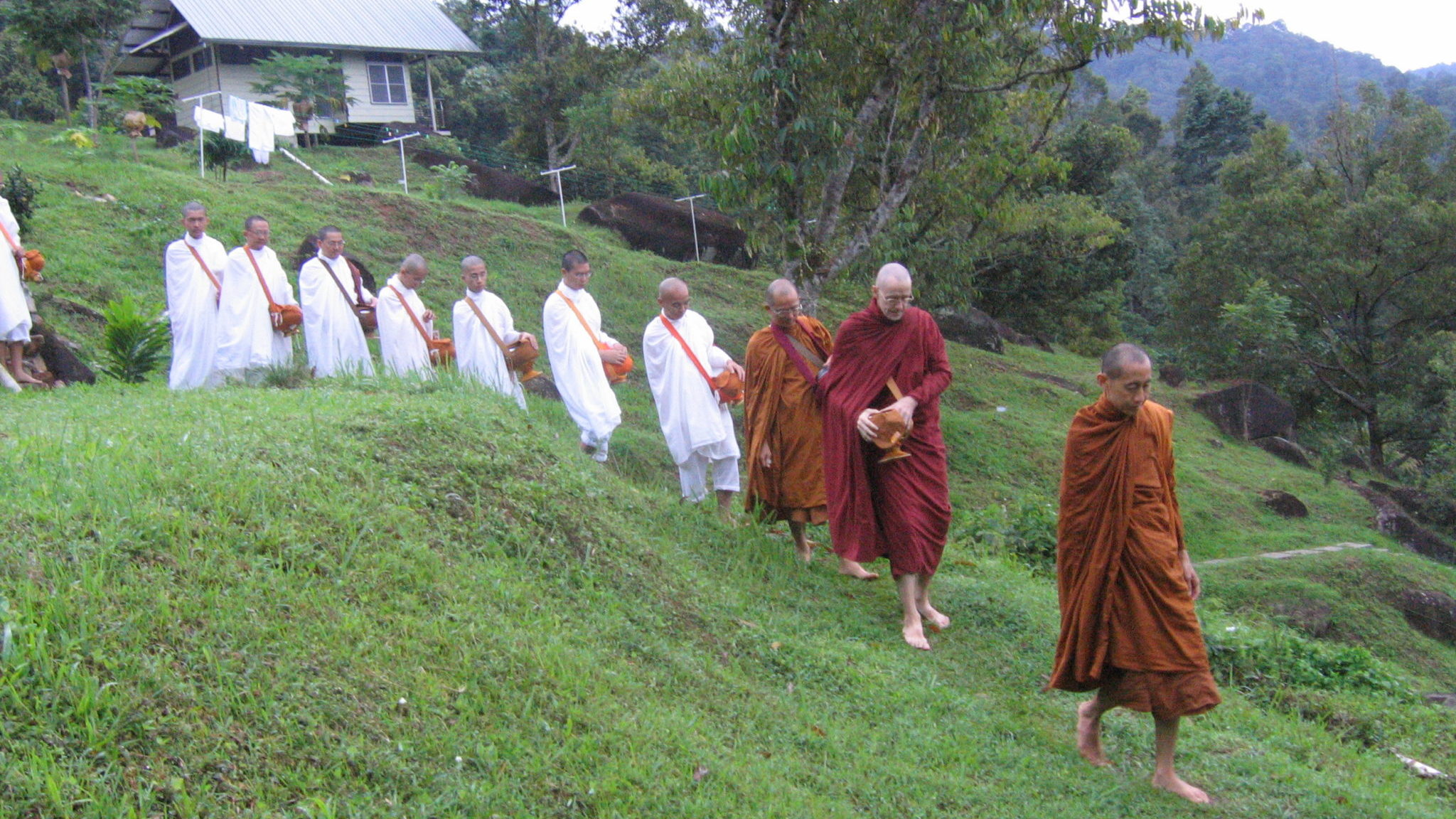 Ashin Vamsarakkhita’s visit coincided with Introduction to Monkhood Programme 5. He writes on why the kind of efforts by Sasanarakkha Buddhist Sanctuary and other similar places are crucial to the health of the Buddha Sasana.

I had not yet had the opportunity to experience the reputed quiet seclusion of Sasanarakkha Buddhist Sanctuary (SBS). So when a time slot opened I took it immediately with Ven Aggacitta’s kind permission.

Resembling a classic Japanese wood carving of a monastery, SBS sits safely perched on picturesque hill slopes. Its seclusion is well guarded by a steep and winding access road. The air is clear and clean. The view and vista of a distant, miniature Taiping and environs are breathtaking, a quiet reminder of both how close, yet far away saṃsāra can be.

My arrival corresponded to the equatorial early evening’s darkness. After paying respects to the venerable, there was the dusky trek to the topmost kuti. This would be a literal preamble to the gentle ‘fitness regime’ that is the norm at the centre.

SBS has given a new meaning to the letters “IMP”. Any knowledgeable English speaker seeing this letter grouping immediately imagines a somewhat mischievous little creature whose delight is to wreak havoc for all around. Not so at this centre! The participants in the IMP program (also known as IMPians; not imps) are anything but the ‘little rascals’ conjured up in the mind.

The words that comprise the program’s acronym immediately set one straight about its intent and the motivation of those joining it. Introduction to Monkhood Program is a comprehensive and diverse two-week opportunity to examine and temporarily experience a form of monkhood. While not formally undergoing the higher ordination of a bhikkhu, participants undertake Eight Precepts and wear white robes.

Under the auspices of the resident monks, they are guided through a tour, sampling many components of a monk’s life. This would include meditation, chanting, Vinaya study, a variety of discussions on topical studies and so on. Also mandatory is participation in the daily ritual of piṇḍacāra (alms round). The early morning trek up and down the steep hilly trail not only provides a modicum of healthy exercise but also vividly brings to life the sweet interdependence of the laity and the Sangha.

My arrival also corresponded with the tail end of such a program with its new ‘record number’ of interested students. One of the topics on the docket for discussion, in my estimation, best exemplifies an important part of SBS’s ‘mission’.

The subject of discussion was the as yet unpublished (I believe) book by S. Dhammika, The Broken Buddha1. Each student was responsible not only to read the entire text but also to summarise and present one or more sections for the group at large in a round table forum. In this way, I benefited from the collective work of the participants and only needed to skim the book to acquire a good grasp of the book’s message.

On a general level the book is a reasonably accurate, although one-sided, treatise on what has gone wrong with Theravada Buddhism. I say “one-sided” because the author uses a series of incidents under topical headings to illustrate a number of failings in present day Theravadism. There is no attempt at all to give a balanced ‘what’s working’ perspective in the piece. There is no dispute with any of the Buddha’s core teachings. The author only examines where and when ‘the rubber meets the road’ so to speak. Theravadin practice, as it manifests today, is generally woefully lacking in its integrity to the Buddha’s actual teachings.

Ranging across topics such as, how a far too liberal interpretation of the Vinaya has fostered laxity, laziness and boredom in some monks in the Order, to the arrogance and entitlement which has been systematically bred into the members of the Sangha; to how the qualities of charity and compassion for the poor and less fortunate have been suppressed or outright eliminated from the Theravadin mind set—the book paints a bleak picture of an ever more aloof Sangha and a servile and gullible laity.

The essential upshot of the book is that ‘the deal’ between the Sangha and the lay supporters has been severely compromised or broken, if not abandoned altogether throughout the Theravadin family of countries. ‘The deal’ is this. Monks are to be honoured and freely supported for all the four requisites necessary for a comfortable and healthy lifestyle. In return monks are to
1 conduct themselves, at all times, in accordance with a strict interpretation of the Vinaya
2 practise meditation diligently with a view to attaining the deepest possible experiential understanding of the Buddha’s teachings
3 study the suttas and other teachings of the Buddha
4 when ready and invited, speak and teach the Dhamma to the laity, via talks and meditation instruction, or any other way deemed appropriate by qualified senior monks, or
5 any combination of the above, always inclusive of (1).
Pride, one of the last fetters to go in the process of enlightenment, must be watched carefully lest it billows into a flash fire of idiotic and unbecoming behaviour. The realisation that all privilege and honour are only given to the monk as an ‘agent’ of the Buddha, not to the person himself in the robes, is a helpful antidote to this toxic pride.

If this deal is followed as well as humanly possible, the Sasana will flourish. Everyone wins. The laity receives proper, suitable and inspirational Dhamma teaching with which to assail and lessen its suffering. The Order is maintained in strength, faithful to its initial structure and purpose, which the Buddha intended. Individual monks can live healthy and productive lives in service of the highest and noblest of undertakings—the quest for freedom and authenticity. Win, win, and win!

Whether one agrees with the premise of The Broken Buddha completely or partially is not necessarily the point. The importance of its presence in the curriculum of the IMP is three-fold.

Firstly, it serves as an educational wake-up call for the participants as they return to their lay lives. Evidently, there are monks who are not upholding their end of the bargain between themselves and the laity. It behoves the laity to develop a more discerning and perceptive eye regarding the placement of their support. Their support is voluntary and they have a right to receive ‘value’ for their hard-earned donation. Respectfully holding the Sangha accountable to ‘the deal’ is not an unfair expectation. Moreover, I would say that is its obligation. If a monk or a vihara is not keeping up to its end of the deal, take the support elsewhere. At the end of each IMP, I believe a few more ‘discerners’ returned home with a clearer understanding of what a good monk is.

Secondly, any IMPian who does decide to take up the robes will have a clear idea of what is expected and how he is to behave as a monk. Hopefully, he will shine as an example of one who truly lives “The Dhamma”.

Thirdly, self-examination and self-awareness is at the heart of the process leading to liberation’s wisdom. Any book such as The Broken Buddha must foster a critical look into one’s own actions and ideals. Not a bad thing to do. In fact, it is an ongoing essential process if one is to avoid a paralysing complacency, which strangles any possibility of growth towards freedom.

When my time at The Sanctuary drew to an end, I wended my way down the steep switch-backs to the valley below. I reflected on how important and precious places like SBS were to the preservation of the Sasana. I was slightly miffed by the bold one-sidedness of Dhammika’s book. I have seen many beautiful and inspiring things as a Theravadin monk. I have seen people’s difficult lives dramatically change through meditation practices taught by the Buddha. I have heard profoundly marvellous talks by some of the greatest teachers alive today. I have witnessed these same monks lead exemplary and pure lives, which inspire deep faith in their followers. The present forms of the Buddha Sasana may have some loose cannons and imperfections as do all human endeavours, but what works must be protected and discernment must weed out that which does not serve.

I glanced back up at SBS, now a miniature and distant woodcarving. I realised ideals are sometimes hard to keep but like the daily trek back up to The Sanctuary, a little patience, a little persistence and a little care go a long way to taking one to the topmost places in the world.

1Editor’s note: At press time, we found that it is already published on the Web.