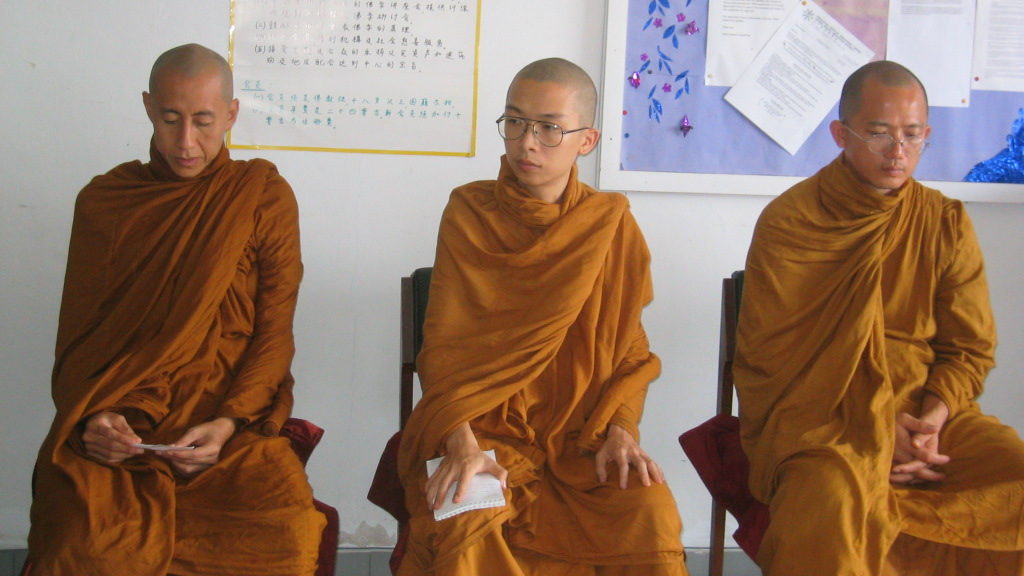 Special Occasion: The First Day of the Chinese Lunar Year

Ven Aggacitta: Since this is a special day, the first day of the Year of the Monkey, we will also tell you some monkey tales in a special way. Ven Kumara, Ven Balacitta and I will take turns to tell you monkey tales from the Jataka Tales as well as monkey tales of more recent times.

Ven Balacitta: This is the 57th tale from the Jataka Tales about a special monkey king who possessed a number of virtues. This monkey was our Lord Gotama Buddha in one of his many previous lives. At that time, his cousin, Devadatta was also reborn as a crocodile.

The monkey lived by the bank of a river and on the opposite bank were found various fruit trees. The monkey would go in the morning to eat the fruits, coming home only in the evening. As the river was wide, the monkey had to break its jump mid-river by landing on a rock in the middle of the river and from there make another jump to the other side. Now there was a crocodile living in that river. One day, the crocodile’s mate, which was pregnant, wanted to eat the heart of a monkey. So the crocodile went to the rock and waited for the monkey to land on it on its way home after eating fruits that day. The monkey, on reaching the river bank, saw that something was different about the rock and suspected something amiss. It called out to the rock, “Hello, rock,” three times. After a pause he said, “Why don’t you answer me today?” The crocodile, on hearing this, decided to answer and told the monkey it was waiting to devour it. The monkey then replied, “All right, but you must first open your mouth wide for me to jump into.” With its mouth in this position, the crocodile’s eyes now faced its back so it could not see the monkey when it jumped and so it successfully reached the other side, unharmed.

Ven Aggacitta: On realising what had happened, the crocodile then uttered these words: “Whenever a monkey king like you possesses these four things, he shall overcome his foes.”

“Foes” here can also refer to the obstacles in your life.

The four things are:

The monkey had every intention to jump when he told the crocodile he would do so. So he spoke the truth.

The monkey had foresight because he could foresee that if he miscalculated his jump he would land in the open mouth of the crocodile. So he planned his jump with accuracy.

The monkey put in the effort to plan and execute his jump.

The monkey was prepared to sacrifice himself in the event he miscalculated his jump.

These 4 qualities are very important for all, but especially so for those in business. In business if you are not truthful you will not succeed as people will not trust you. Foresight is also important because you will have to study a situation and plan ahead before you take any action. Effort means one must have resolve and determination to work towards one’s target. Finally, fearlessness involves a readiness to take risks as well as to make sacrifices. Maybe that’s why people say that for an organisation to do well, it has to be run by businessmen, as opposed to government servants as the former are more inclined to take risks. Although The Buddha was a monkey, he had all these four qualities.

Now I’ll tell you a modern day tale about a monkey who lived in a forest near a forest monastery in Thailand. There, the monks often had group meditation in the sala, an open hall, of the monastery. The monkey would often sit behind the group of meditating monks. Can you imagine a monkey being able to sit still? This monkey did!

One day this monkey came into the kitchen to steal some food and was seen doing so by a nun who admonished it, saying. “You already have enough bad kamma to be born a monkey and still you do not know how to keep your precepts!” On hearing this, the monkey banged its head against the wall and committed suicide. Possibly, this monkey could have been a monk or a meditator in its previous life but because of an unwholesome last thought moment had been reborn a monkey. That’s why it’s important for you to learn meditation, because if you can control the mind, then you will be able to control the last thought moments of your life so as not to cause rebirth in an unfavourable realm. So since we will be beginning another meditation course in TIMS in February, do make use of this opportunity to learn.

Here’s another modern day monkey tale. There was a man who liked to go hunting for monkeys. One day, he shot a monkey. When the man went to collect his game, he found the monkey holding its baby in its arms. On seeing the hunter, the monkey held out its baby to the man as if to say, “Now that you’ve shot me, will you look after my baby for me?” The man was so touched that he never went hunting again. The love of a mother for her child is like metta. The basis of metta is to have consideration for others: do unto others what you would have others do unto you.

Ven Kumara: I’m going to tell you how to catch a monkey. Just make a hole in a coconut big enough for a monkey’s hand to go in but not big enough for its clenched fist to come out. Put food in the coconut and tie it to a tree or something firmly planted in the ground.

Lured by the food, the monkey will put his hand into the coconut and seize the food. When he does that, he would not be able to pull his hand out. Neither can he run away with the coconut since it is tied to a tree. Actually, he can easily free himself. All he has to do is to let go of the food. That’s all. However, most monkeys would not do that. They’d rather struggle and struggle in vain.

That is how the monkey allows himself to be caught by its own greed. Likewise, if we can let go of our desires, then we can be free. Though it is normal for humans to have desires, we must be wise enough not to be crazy over things. Otherwise, we would just be like the monkey: caught by it’s own greed.

Once I was in a car driven by someone who was sending me back to where I was staying. In order to avoid the traffic jam, he decided to take a shortcut through the UM campus. Apparently that was not allowed, as we could see cars ahead of us being directed out again. When stopped by the security guard, the driver lied that he was on his way to attend some seminar in the campus; but on being questioned further, he was hard-pressed to give particulars of the ‘seminar’. I could feel that he was rather uneasy over the matter then and throughout the rest of the journey. Perhaps what made it more difficult was that a monk was sitting next to him. He was trapped by his desire to avoid the traffic jam. He could have just turned back like the other drivers. It would have probably taken just an extra half an hour to reach our destination, which I think which would habe been wiser than to break one’s precept and feel so uneasy over the matter. Conscience outweighs convenience.

Ven Aggacitta: Here’s another story about catching monkeys. This is from Makkata Sutta (SN 47:7), told by the Buddha himself.

To trap a monkey, just prepare some sticky substance such as the sap of a jack fruit tree together with some bait. Once lured by the bait, the monkey cannot free itself from the trap—hands, feet and mouth are caught in the sticky substance and there’s no way he can free itself. Eventually it is caught.

Yogis can only make progress during a retreat if they can practise sense restraint. That is why yogis are discouraged from looking around them so as not to be distracted.

Your two arms, two legs and mouth are like your five senses. If you are like the monkey, then you will not be able to watch your mind and will always be thinking of sensual desires. Tame the monkey mind—restrain the senses and note the mind.