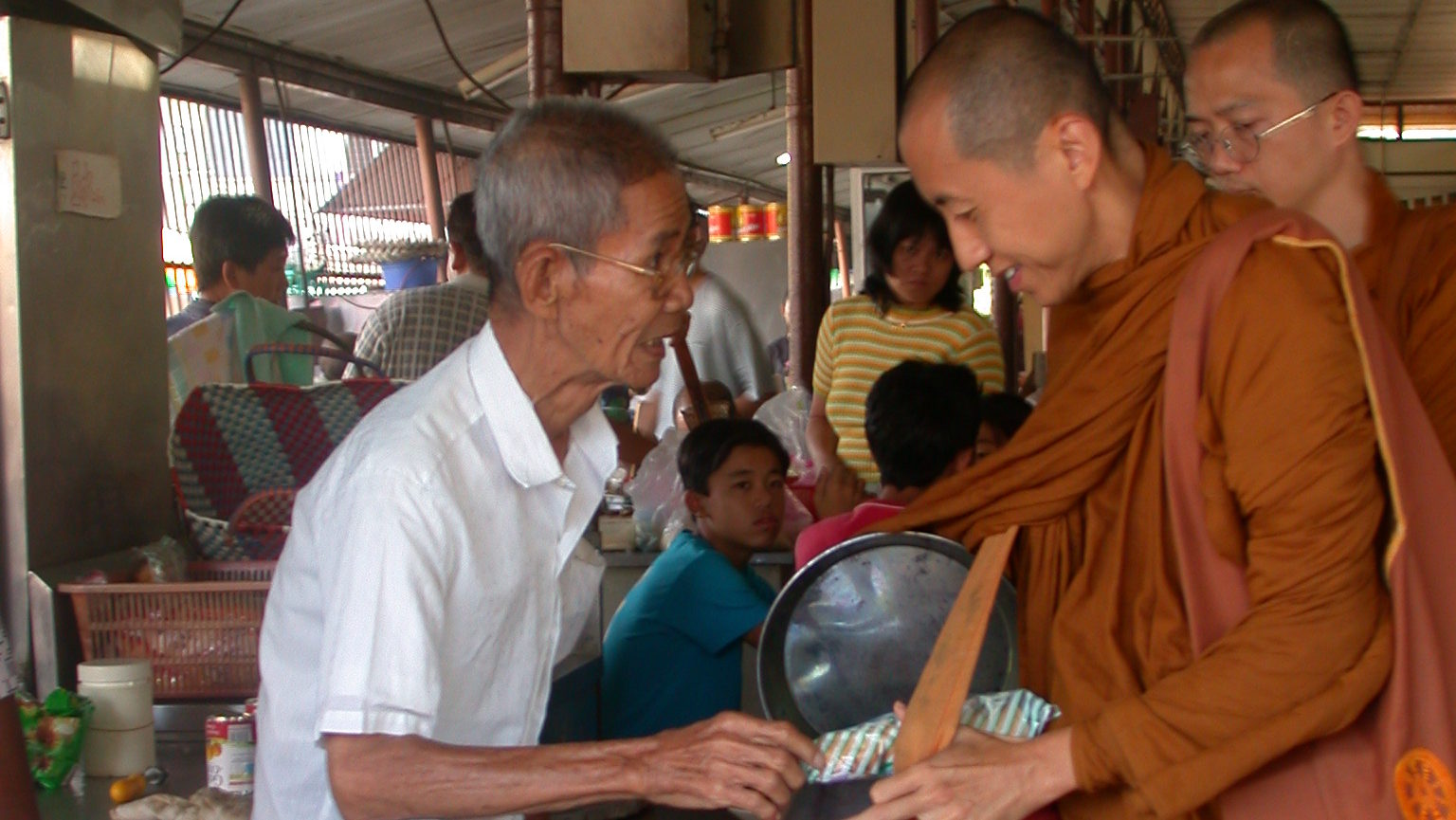 As we step over to a new year, Ven Aggacitta reviews the major events of 2003 and charts the direction for SBS in 2004.

Perhaps the two most significant events in SBS for the year 2003 are the first sāmaṇera (novice) ordination, held on 13 July, and the Introduction to Monkhood Programme (IMP), held from 25 Nov–9 Dec. These are the first big steps towards realising our primary objective of establishing a home-grown Sangha nurtured by holistic monk training. In addition to these, we have also taken other new steps: piṇḍacāra (alms round) in the markets and hawker centres in and around Taiping town on Sunday mornings; more frequent Dhamma propagation activities outside of Taiping; weekly sutta (discourse of the Buddha) discussions; and explored another popular method of vipassanā (insight) meditation.

The virtually completed Phase 3 construction was pivotal to the success of IMP, as until then, we were lacking in proper communal facilities for residential group activities. Although the first IMP was targeted at Forms 5 and 6 school leavers just after their exams, we didn’t receive a single application from that age group. Nonetheless, the first IMP participants were quite a receptive lot despite their varying age differences. The positive feedback from them not only justifies IMP, but is also an impetus for us to go for the next one soon — this time targeting university students during their forthcoming year-end semester break.

Pindacara in the markets and hawker centres in and around Taiping on Sunday mornings (whenever possible) is our way of trying to redeem the tarnished image of Buddhism wrought by robed exploiters who accept money or exchange purportedly blessed talismans or strings for money. We started on 24 August, and are making this an ongoing task to educate the public, by practical example, that Buddhist monks — at least Theravadins (those who profess Theravāda — “Doctrine of the Elders”) — do not accept money on pindacara.

We have also increased our Dhamma propagation activities beyond Taiping. In early 2003 I gave Dhamma talks at the Buddhist Society of Ipoh and Mahindarama Buddhist Temple, Penang. Later in October, I delivered a series of lectures on “Dying to Live” for the Course on Living and Dying held at Than Hsiang Temple. The course was organised by the Malaysian Buddhist Sangha Association primarily for students of the Malaysian Buddhist Institute. While in Penang for the course, I also conducted Pāli (a language in which Gotama Buddha’s teachings are preserved) chanting and vipassana meditation sessions in the evenings at Penang Buddhist Association for the Universiti Sains Malaysia (USM) students’ English Dhamma Camp. At the end of 2003 to the beginning of 2004, while in Penang to oversee the final production of this newszine, I led a Dhamma discussion in LotusBud (a Buddhist house of USM students at Taman Permai) and gave Dhamma talks almost daily in Peace House, Malaysian Buddhist Meditation Centre and USM.

Ven Kumara was also invited to give talks / lead Dhamma discussions at the Ipoh Buddha Dhamma Association, Buddhist Society of Ipoh and Persatuan Buddhis Universiti Malaya. We plan to reach out to even more people in 2004. Imagine how many more lay Buddhists would benefit if we had more suitably qualified monks to serve!

The Vinaya (monastic discipline) can be likened to the foundations and superstructure of a multi-storey building, while the Dhamma (teachings found in the suttas) is like its claddings, fittings and facilities. One without the other would not be complete or useful. That’s why the Buddha called his teachings “DhammaVinaya”. Bearing this in mind, we now have, whenever possible, weekly sutta discussions to supplement daily Vinaya classes, Dhamma talks on Uposatha days (full moon and no moon days when monastics meet to reaffirm their commitment to the monastic discipline), and regular meditation sessions. We hope that with the participation of more resident monastics, these sutta discussions will be even more interesting and enlightening.

In SBS, we try to abide by the ancient spirit of liberality where monastics practise different methods of meditation while staying together in the same monastery in perfect harmony. SBS monastics had a chance to explore another well-known technique of vipassana meditation at the end of the year. We planned to attend a 10-day retreat in the tradition of Sayagyi U Ba Khin organised by the Malaysia Vipassana Meditation Society, while Ajahn Jeff Oliver stood in for me to conduct a retreat for SBS helpers. At the last minute, Ven Kumara could not make it due to health reasons, but Ven Balacitta and I had a beneficial retreat in Sabak Bernam. Perhaps 2004 will see the prevailing spirit of liberality in SBS enhanced by the introduction of a new meditation technique.

With the completion of Phase 3 construction, we hope to take a break from building projects — at least for 2004 — and concentrate more on fulfilling our spiritual objectives by implementing more effectively the knowledge gained through Vinaya classes and sutta discussions; having more meditation retreats; making good use of Phase 3 facilities for more residential group activities and reaching out to more people, especially the younger generation.

“Three to Four” is but a step nearer our long-term goal of “monk building”, and along the way we will always have in mind the short-term needs of our faithful supporters.