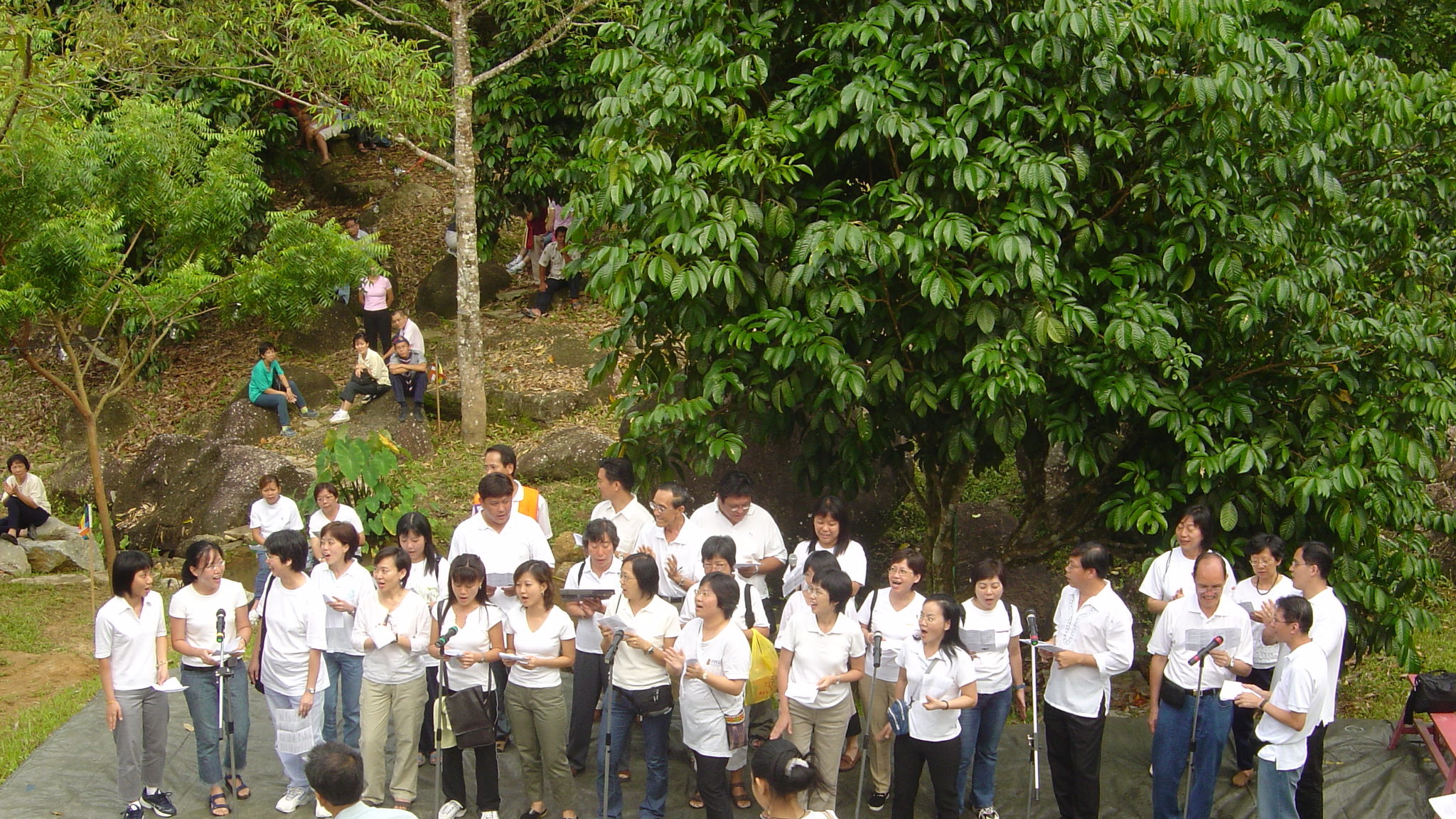 Some 120 members of Buddhist Fellowship (BF) of Singapore endured the 460-kilometre journey from Singapore to Taiping in three coaches to participate in Sasanarakkha Buddhist Sanctuary’s Kathina held on 26 October 2003 and in the process learnt what SBS is all about. Ahangama A.P. reports.

After a year of singing the soulful refrains about the Sanctuary at Sunday sessions in our Fellowship Centre, we were finally here, in Taiping.

…at the edge of the forest,
where the spring water flows.

Certainly, the rich imagery Florence Tan had built into Datuk Dr Victor Wee’s inspirational tune had boosted all our expectations.

At the edge of the forest,
there are hills high and low,
There the Dhamma seed’s planted,
and the Sangha shall grow.

We were here to see this haven, set in idyllic surroundings among the trees, where the essence of Buddhism was being nurtured. Indeed, what we witnessed was this and even more.

Impressions of the Sanctuary
“Such beautiful surroundings… it’s just beautiful!” gushed seventy-year-old BF veteran, PC Lim, one not normally stuck for words. “The ambience is so very tranquil, ideal for meditation,” added another BF stalwart, KK Lim. Echoing their sentiments, another BF member, Beng Choo, stated, “I’m personally quite attuned to Nature and now being here, singing the Sasanarakkha song in future will be much more meaningful to me!” Her husband, Choon Fatt, added, “It’s beautiful, peaceful… blending of natural beauty with modern technology. I just hope that as the Sanctuary develops, there won’t be too much technological influence to spoil the environment that’s so conducive for the monks to meditate and practise the Dhamma!”
In short, the general opinion was that the Sanctuary remains true to its ideal of being just that, primarily for the training of monks.

This objective was reiterated yet again in Ven Aggacitta’s brief address after the offering of kathina accessories. Relating how he and other monks go for alms once a week at various wet markets and hawker centres in and around Taiping, he said that it had the salutary effect of getting across the message that “monks do not take money on alms round”. This is a current bugbear affecting Buddhist communities in Malaysia (and even in Singapore). To use a more recent adage, nothing was more
effective than “walking the talk” — educating the local populace by example!

Guardian of the Sasana,
Sasanarakkha,
Upholding the Dhamma,
For beings near and far.

Lessons from the Kathina ceremony
It was an inspiration for the Singapore delegation to participate in the kathina ceremony. Particularly so was the tradition of presenting the cloth to the deserving monk, cutting it, sewing the pieces together into a robe, dyeing, and finally drying it. It could not have escaped those present that this daylong process would remind the Sangha of their humble origins and, by having to work together, the virtues of harmony and humility.

Upul Rodrigo commented, “Different societies celebrate the event with slight variations. With the passage of time and particularly because of the complexities involved in organising this in the traditional way, most temples resort to a mere robe-presentation ceremony. The essence is therefore lost!”

For Lina Goh, it was the piṇḍacāra (alms round) that was the most memorable. The recently joined BF member said, “It transported me to Lord Buddha’s time because of the traditional way it is done here, with devotees all lined up to offer rice as the monks filed past with their alms bowls.” Though familiar with the kathina event itself, KK Lim found that it was the explanation of the rituals and practices that brought new meaning. For him, the ceremony, though simple, was very meaningful.

Sponsors’ participation
For a good number of those present, the sponsors’ stage presentations, which formed part of the day’s programme, also held a special place in their hearts. BF’s choral rendition of 12 popular Buddhist hymns was certainly a hit, even inviting foot-stomping and chorus support from members of their co-sponsor, Bandar Utama Buddhist Society (BUBS) of Petaling Jaya. The latter’s humorous sketch, in a mix of Peranakan and colloquial Chinese, not only brought on the guffaws but also highlighted the problem of “bogus” monks.

Other lessons learnt
The journey up to the Sanctuary the day before Kathina Day also held lessons for some. BF Youth member, Lester Chia recollected, “It was quite a struggle trekking up the dirt track and I remember asking myself why this was necessary — until I came across 78-year old Ah Ma (grandmother) just ahead of me. She encouraged me with calls of jia you — to step on the gas. She was an inspiration and I learnt a lesson that day — only a determined mind will ensure ultimate success both in life and in our spiritual development.”

For PC Lim, the care and concern of fellow trekkers for his welfare throughout the journey from Singapore touched him. “Coming up the hill, for instance, they would sidle up beside me or even behind me without appearing too obtrusive. Makes an old man like me feel really good!”

More lessons learnt
During the tour of the Sanctuary, we were told that the open-air shrine is a gentle reminder that to practise Buddhism, one does not need the edifice of a temple. Lord Buddha, in his day, preached in the open and was exposed to the elements. It is in the practice that we discover the truth and become worthy heirs of his teachings.

Expressing these same sentiments, PC Lim noted, “This has been a very spiritual journey for me.” Joe Leng, in turn, is looking forward to more such outings by BF. “It has been a new but good experience! I was delighted to witness the Malaysian and Singaporean groups blending so nicely to make this kathina so special for all of us.”

Overview
It is an honour for BF to be associated with this kathina ceremony as a co-sponsor under the aegis of Sasanarakkha Buddhist Sanctuary. BF Vice-President (Member Affairs), Clara Tang has this to say, “The enthusiasm of our members right from the start has been inspiring. We look forward to the day when we lay people can come here to meditate…!”

We had set out to include a monastery visit on our BF calendar this year because we could not think of a project more worthwhile than one which would expose our members to the essence of Buddhism. When the opportunity arose for us to be a co-sponsor for the kathina, we naturally grabbed it. Judging from the initial feedback, we not only fulfilled our objective but many members walked away from here significantly inspired to put the Buddha’s words into daily practice.
Sādhu (well done)! Sādhu! Sādhu! Long live Sasanarakkha Buddhist Sanctuary!