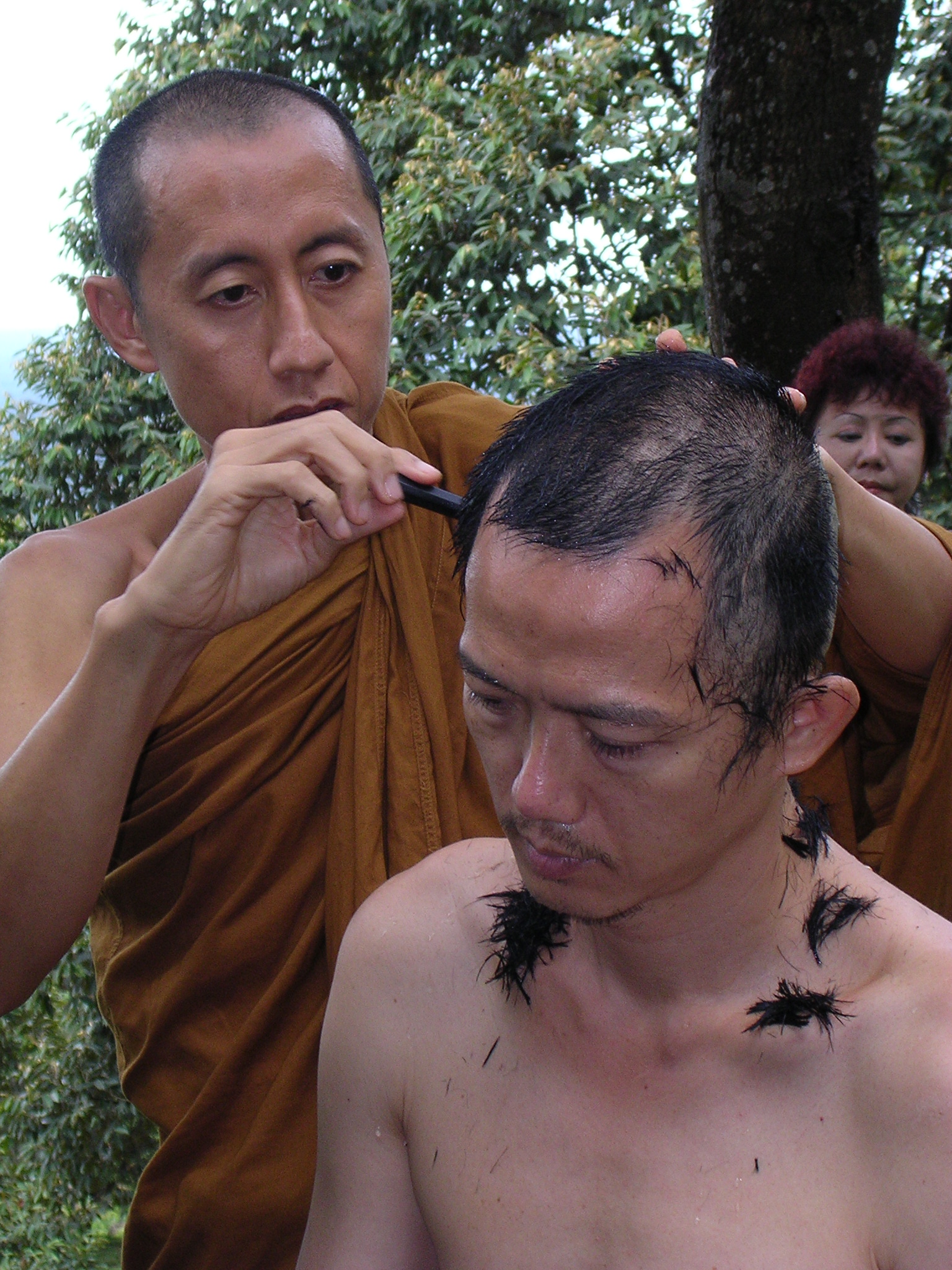 The first sāmaṇera (novice) ordination was conducted in SBS on the open deck of the Buddha Shrine, witnessed by a small group of devotees and family members of Ong Chin Cheong.

Sunday, 13 July 2003 was an auspicious and memorable day for SBS. This was ordination day, the first such to be held here.

Bro Ong Chin Cheong has spent more than a year as a postulant and today he would take the vows of a samanera. As this was our first visit to SBS up in the beautiful hills of Taiping, we really felt honoured and proud to be part of the proceedings.

It had rained in the early part of the morning but by the time the devotees started to go up the hill, the rain had already stopped. A very fresh and crisp hill breeze greeted us with the sun hidden behind some light clouds. The devotees were already up the hill with food for piṇḍacāra (alms round).

The crowd made its way to the open deck of the Buddha Shrine and waited with much anticipation and enthusiasm for the ceremony to start. We noticed most people there seemed to know one another, mingling freely in an atmosphere of fellowship.

At 9.00am Ven Aggacitta, Ven Kumara and Bro Ong made their way to the platform and the ceremony began. This was the last occasion for the devotees to see Bro Ong with his crop of hair and in layman’s clothes. Ven Aggacitta then announced that the ceremony would be conducted in Pāli (a language in which Gotama Buddha’s teachings are preserved) and Bahasa Malaysia.

Bro Ong knelt before Ven Aggacitta, asked for forgiveness and requested for samanera ordination by reciting the stock phrases from the Pali scriptures. A translation below shows us how relevant and meaningful those words are even at this time:

Bhante, as I understand the Dhamma preached by the Blessed One, it is not easy for one dwelling at home to lead the perfectly complete, perfectly purified holy life, bright as a polished conch. Bhante, I wish to shave off my hair and beard, put on dyed robes, and go forth from the household life into homelessness. May I, Bhante, receive the -going forth in this DhammaVinaya (Doctrine and Discipline). Out of compassion, please make me go forth, Bhante.

His request, expressing his wish to renounce worldly responsibilities, politics, business and family life and thus dedicate his life to the study, practice and propagation of the Dhamma, was repeated two more times.

Several of us followed Bro Ong to the back of the Abbot’s Office where the hair shaving ceremony was performed. This was initiated by his mother, who pulled the razor through his hair a few times. Ven Aggacitta then finished the task. It was a touching moment when Mrs Ong picked up a tuft of hair to keep.

The proceedings shifted back to the open deck for the next stage of the ceremonies when Bro Ong received his robes from Ven Aggacitta. Ven Kumara then accompanied Bro Ong back to his kuti to help him put on the robes. While waiting for them to return, Ven Aggacitta explained to the devotees present the significance of the request to “go forth from the household life into homelessness”. He also said that when Bro Ong returned wearing his robe he was not a layman but neither was he a samanera, because he had yet to formally take the “Three Refuges”.

Looking serene in his robe, Bro Ong knelt before Ven Aggacitta and -recited the “Three Refuges” after him. We were told that it was of utmost importance for the recitation in Pali to be done with perfect pronunciation; otherwise, the samanera ordination would not be valid. Ven -Aggacitta bestowed upon him the name Ven Balacitta, which means “strong” or “powerful mind”.

The ordination ceremony was over by 11.00am, followed by pindacara in which everyone present participated. We could see happiness and pride written on the faces of the people around and especially on the face of Mrs Ong, who later told us that from a very tender age her son had wanted to become a monk.

In a brief and impromptu interview, Ven Balacitta said that from 1988 he had gone from temple to temple trying to find out more as he had made up his mind to give up the worldly life but he could not find a satisfactory place. He is now very happy that in SBS he can study the scriptures at source instead of being confused with different interpretations.

There was an air of happy fellowship amongst the people present. We truly felt proud to be involved in such a simple yet moving ceremony, rendered all the more meaningful by such a show of support and pride from all present.