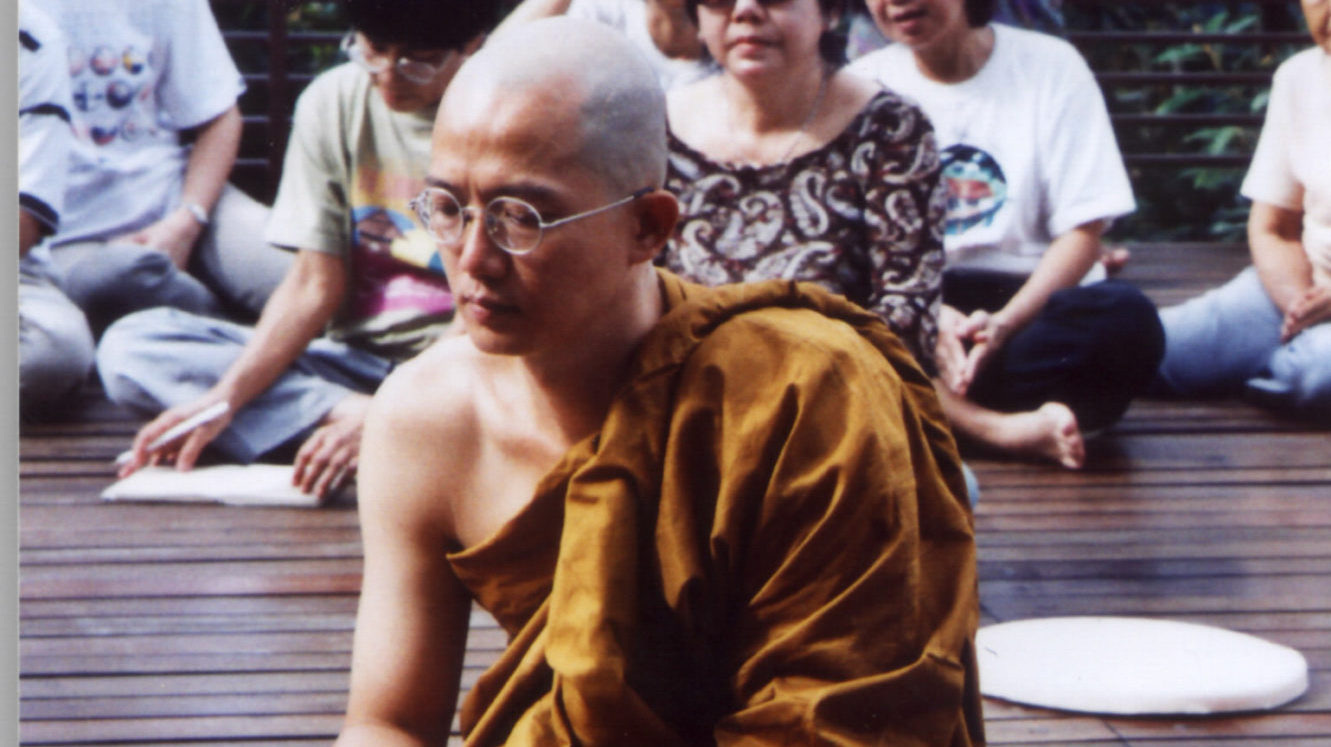 SBS’s first samanera has found what he had been searching for in the Sanctuary.

Venerable, for starters could you tell us briefly about your background?
I was born in Kuala Lumpur in 1964 and grew up in the outskirts, amidst rubber and oil palm estates.

How did you encounter Buddhism?
I was actually born into a Buddhist family. So Buddhist values have been ingrained in me from young. However, being young I was not actually aware of their significance until now. At that time I only knew that certain things were right to do and certain things were wrong and should be avoided.

During my early twenties, I went from one temple to another. I was dissatisfied and confused with what I encountered. Then I met a Theravadin monk who advised me to go to a monastery in Thailand to learn, if I was interested in Buddhism. So in 1988 I left for Thailand. I was actually in a forest monastery called Wat Pah Nanachat in NE Thailand. It was there that I first came in touch with life in a forest monastery setting. I liked the idea of living in seclusion. I was happy during my two-month stay there.

So where did you go from there?
After Thailand my purpose in life became clearer. On returning to Malaysia, I started attending talks at the Brickfields Maha -Vihara.

Have you ever been into any other religion apart from Buddhism?
Yes, I was with Sai Baba for a while. It was quite attractive to me then. But my visits to the Brickfields Maha Vihara changed the course of my spiritual life. I wanted to renounce but didn’t know where to go. I hadn’t heard of any forest monasteries in Malaysia. I thought these could be found overseas only.

How then did you know about SBS?
I actually learnt about SBS by accident. I happened to pick up an SBS newsletter on the free publication bookshelf in SJBA. I looked at the cover and I put it back thinking that it must be somewhere overseas. Then, I don’t know what made me take a second look. I realised then that it was in Malaysia, and it was a forest monastery at that. So I was immediately interested and rang the SBS office to make inquiries. I actually wanted to be ordained as a monk at that time but was told that I had to go through life here as a postulant first. So, after a trial stay here for about a week as a prospective postulant, I went back to settle all my affairs in KL and returned to SBS at the end of May 2002.

Did you encounter any objections from your family when you decided to leave lay life?
Yes, but not from everybody. Anyway, what is there to object? I believe I have performed my duties as a son. I have worked hard to give my brother an education as my father passed away when we were very young. So why should they object when I am now fulfilling my own destiny? But I admit that the most difficult part was to let go.

You are SBS’s first postulant. Can you tell us about your trials and tribulations during the one year as a postulant?
Life as a postulant was really difficult especially in the first few months. It was most difficult trying to separate lay life from spiritual life. I was neither a lay person nor a monk. Being the first postulant, I had no role model to follow. So memories of a lay life pulled me by one hand, and the desire to be a monk, the other. Moreover, I had to adapt to a new environment and a new routine. In SBS, we have to walk down hill and up hill for pindacara. I found this pretty demanding at first, but now I am strong, healthy and happy. It is worth all the hardship I have endured so far.

The indecisiveness as to which side I should go was harrowing. So in the process anger and fear arose. This sort of torment erupted on and off throughout the year.

One day I talked to Bhante about this and asked for his advice. He told me that I had to decide for myself which way I wanted to go. He couldn’t make that decision for me. But he did tell me that I was making good progress as a postulant. When I said that I was not aware of that, he gave an analogy. He said that when a woodcutter first uses an axe the handle is smooth. But after years of usage an imprint of his grip can be seen on the handle although he may not have noticed when it first started to become apparent. It is the same in my case, he said. That remark spurred me on.

Devotees have said that you were not very communicative as a postulant. Is that part of your nature or were you asked to keep your distance from lay people so as not to compromise your practice?
Nobody asked me to do that. Actually, Bhante did say that I was not friendly and asked me to change. But I felt that keeping my distance would help me improve in my practice. When I was a layman I used to be good at entertaining guests because it was part of my job. But now I am on the path of practice to become enlightened and if I were to do that sort of entertaining my practice would be compromised. So I decided that it would be better to keep quiet and concentrate on my practice. Please forgive me, dear devotees.

You are making history by being the first monk to be ordained in SBS. What was your reaction and feelings on your ordination?
In a way I was rather disappointed because I thought I was going to be ordained as a bhikkhu (monk). Anyway, if it is SBS rules and regulations, I can accept it. I am actually happy now.

A monk needs only four basic requisites, i.e. robes, food, shelter and medicine. I believe that no matter where I am ordained, the quality of the requisites will be more or less the same. But I think it must be my good kamma to be ordained in SBS because here the practice is made easier with the support of the faithful devotees and of course, with the guidance of a very dedicated teacher, Ven Aggacitta.

Devotees have remarked that you look very good and seem happier in robes. What do you think?
I don’t know about looking good, but I do feel happy. To be ordained was my target. To tell you the truth, I thought earlier that some kind of bad kamma might prevent me from being ordained. But now that I have been ordained, it is proof that I have not committed such appalling kamma. So how can I not look very happy?

In a year’s time, you will be ordained as a bhikkhu. Are you looking forward to it and will your name be changed again?
Yes, being a bhikkhu has been my goal all this while. If no unforeseen circumstances pull me away from the holy life I will definitely want to be ordained in a year’s time. As for the name, let the Master decide. I am satisfied with the present name but if the Master thinks that by changing it I can become a better person, I will also be happy to accept it.

Do you have any parting words or advice for aspiring monks and lay Buddhists?
For those who aspire to become monks, it is already their good kamma to make such an aspiration. No need for much advice. But if they can enjoy being in seclusion and can meditate well, I believe that they will be able to become happy monks.

However, I would like to say something here. People have different levels of intelligence. So if someone comes and requests for monkhood training, I feel that he should not be turned away or be discouraged. Every aspiring monastic should be given a chance to prove himself. So I hope SBS does not accept students based only on one’s education and level of intelligence.

My parting words for lay Buddhists are, “May all of you be well, happy, healthy and beautiful. May you all become stronger each day in your practice.” Sādhu (well done). Thank you very much.

Thank you for your time, Venerable. We wish you the best in your chosen path. May your progress be swift and smooth. Sādhu.