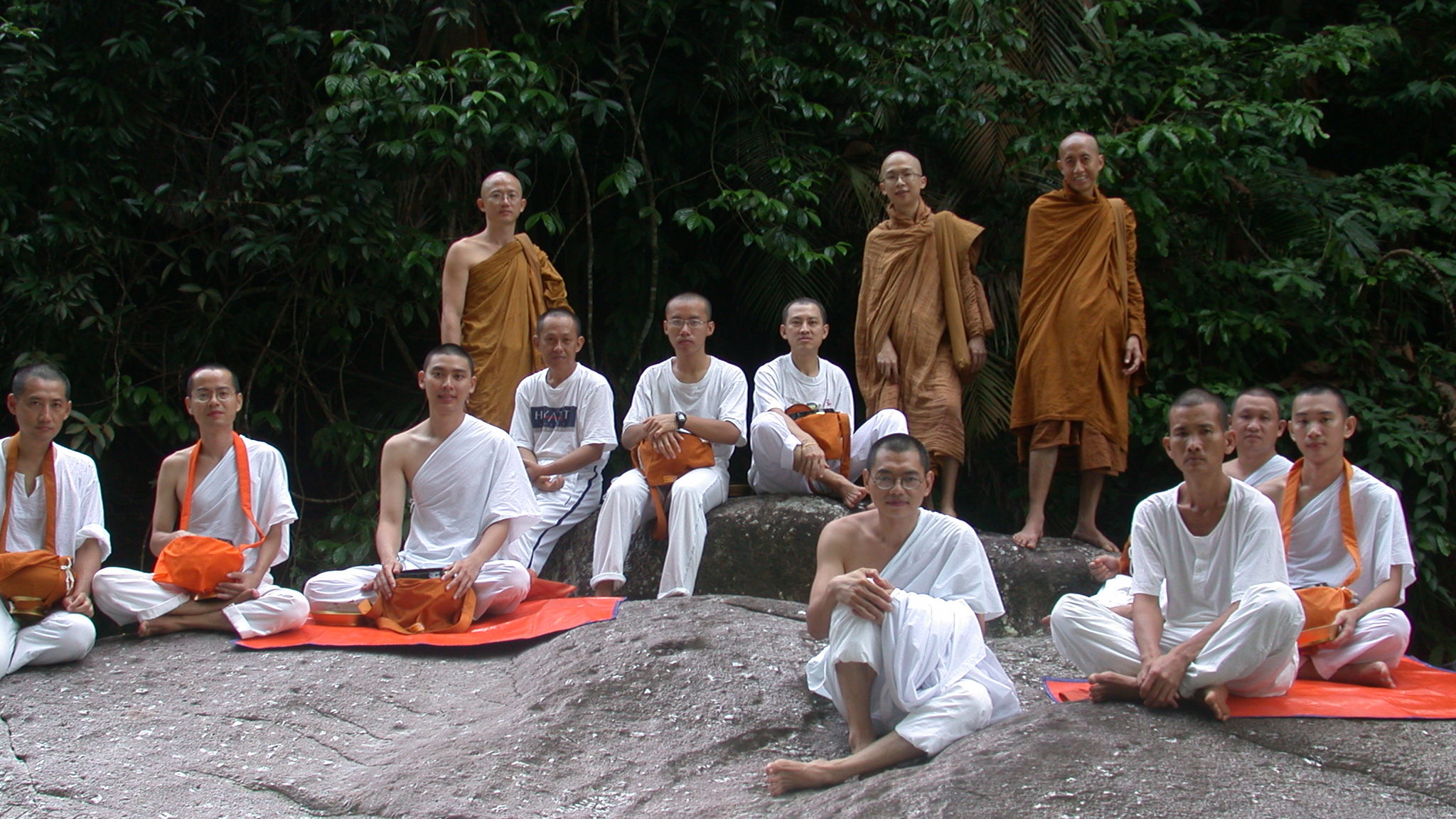 A programme designed to allow Malaysian males considering monkhood to get the feeling of it without having first to make a commitment, was carried out. This will, we hope, help them to make decisions when the time is ripe.

A programme, Introduction to Monkhood Programme (IMP), was held in Sasanarakkha Buddhist Sanctuary from 25 November–9 December 2003. Malaysian men with a bent towards the monastic life in SBS were invited to join the programme which is an emulation of monkhood. Ong Boon Uar, Michael Tan, Lee Toon Sun, KC Ng, Charles Khoi, TL Cheong, Melvin Ho, Victor Lim, and Yeoh Kar Kheng became the pioneers of IMP.

The constraint of facilities limited the number of successful applicants to ten. Unfortunately, one of them had to withdraw at the eleventh hour due to unforeseen circumstances. At the end of the programme, an evaluation exercise was carried out where all the nine participants wrote about their impressions of IMP. This has given us valuable feedback which will stand us in good stead in the tailoring of such courses in the future.

Allow me now to share with you the views of some of the participants, given in response to questions posed to them in the evaluation exercise.

Are you glad you participated in this IMP?
There was unanimous agreement on this. In the words of Thiradhamma, “I had some reservations before I came because I was told that Ven Aggacitta is a very strict abbot and the training programme would be very tough. Well, it turned out to be a very enriching experience for me and I am glad I came.”

Medhavi said “I’m very happy to say that whatever ignorance and misconceptions I had about being a monk have been cleared. Ven Aggacitta is a teacher who has the ability to tap and develop his students’ potential.”

Sivali says, “Ven Aggacitta, being open-minded, patient and kind, is a teacher to whom the participants can voice their opinions freely.”

Has your purpose for participating in this IMP been achieved?
None of the participants were disappointed, although Sumana and Ariyavamsa felt that they did not fully achieve what they had hoped to achieve. Ariyavamsa, who expected IMP to be a meditation retreat explained, “I had come with the main purpose of attending a retreat and the secondary purpose of getting monkhood training.” Sumana however, whose purpose was to gain an insight into the lifestyle of a monk felt that he had not really experienced the normal life of a monk. “It is so because this is a crash course,” he said. The majority came with the main purpose of getting a taste of monastic life in SBS and agreed they had more than a taste of the flavour.

How do you rate your desire and chances of making a long-term commitment to monkhood?
More than half the men came to the programme with an inclination towards making a long-term commitment to monkhood. Their actual experience of simulated monkhood did not dampen this inclination in any way. Thiradhamma said, “Although I cannot join the monastic life immediately, the possibility is there after I have fulfilled my worldly responsibilities.”

For Dhammavijaya and Sumana, the experience has whetted their appetite and they will be coming back for more. They left with the promise that they will be back in SBS as postulants in February 2004. SBS awaits your return!

In what way have you benefited from this programme?
This question received unanimous positive response, with the majority explaining that they now have a better understanding of monastic life, know and understand more about Vinaya rules and are aware of the purpose and benefits of observing them. For some, it was an opportunity to enjoy simplicity and peace.

With inspired conviction, Dhammavijaya said, “Today I have a better understanding of the Theravadin’s Vinaya. If one has a deep understanding of the Vinaya and its benefits for one’s spiritual progress, one will abide by the Vinaya. Then, this automatically harmonises the Sangha community which serves to increase the faith of the lay people. This understanding will dispel uncertainties in one’s mind. Hence one is able to highly discipline oneself rightly.” Subhamitta contributed, “The IMP has helped me to make a better informed decision about joining the SBS monastics.”

Do you find the activities in this programme interesting?
All participants agreed there was never a dull moment. Some of them even felt that two weeks was too short a period of time for the programme. “From day one until the end of the programme, it was so much fun for me. It would be good to have an IMP Advanced Level”, enthused Dhammavijaya.

Generally, the talks by Ven Aggacitta and the guest speakers, discussions and pindacara topped the list of most —interesting activities. It is not surprising that riverside breakfast and yoga were well-received as they were novel experiences for most, if not all, participants.

For Sivali however, pindacara was an unforgettable experience for a different reason. Moved by the faithful devotees who turned up daily, he said, “It took a few days to get accustomed to the physical demands of walking down and up daily for pindacara. But it’s worth the effort. It was touching to see the large group of devotees waiting eagerly to offer food.”

In Conclusion
The success of the first IMP at SBS can best be summed up in the words of Sivali:
“IMP is an excellent programme for those who have stirrings of monkhood. SBS is an ideal place for one who has decided to go forth. This is because SBS has all the necessary facilities and a capable and experienced teacher. SBS also has a holistic programme to train new monks, not only in the theory and practice of the DhammaVinaya but also other skills expected of monks in the 21st century.”