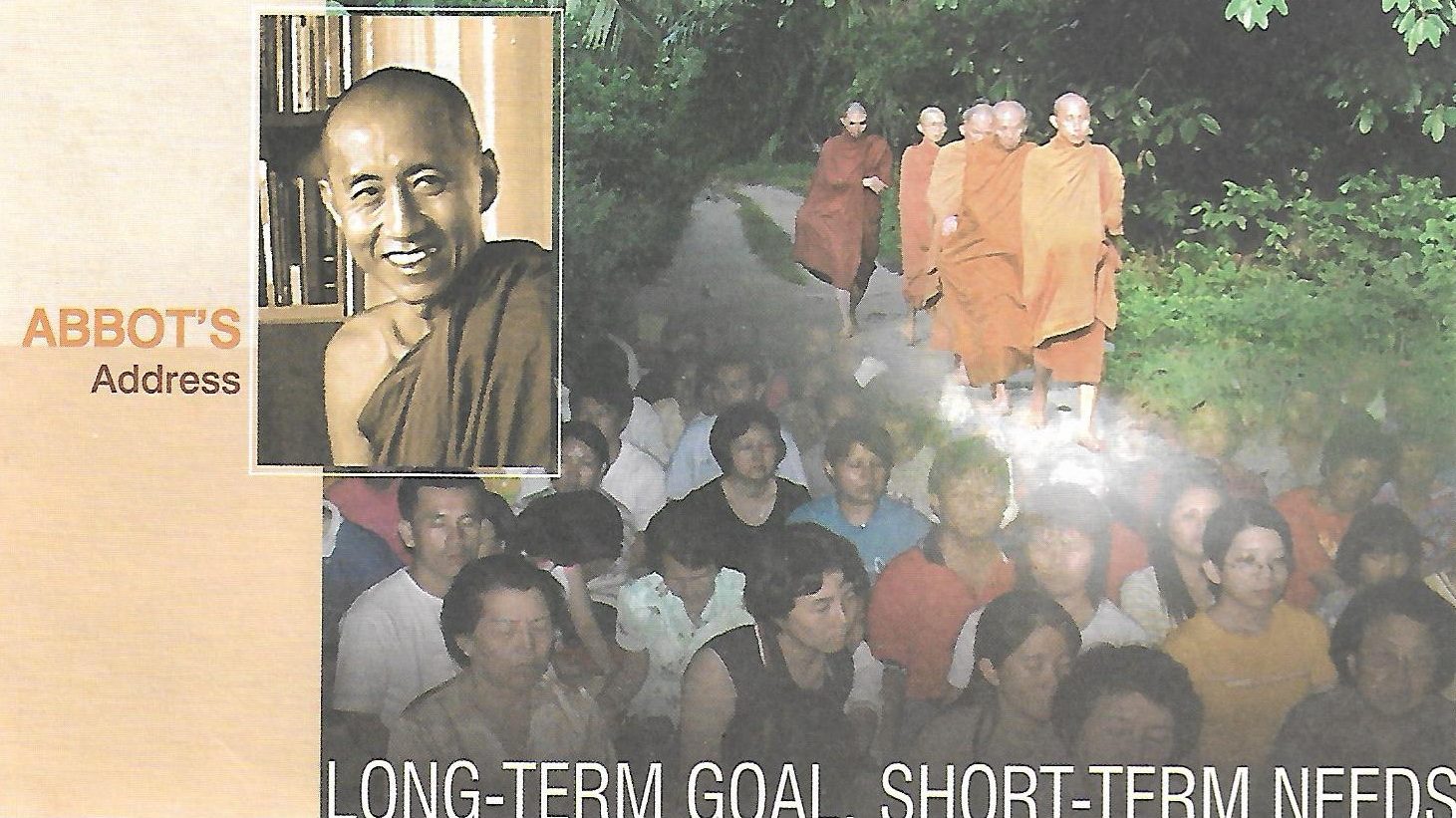 According to the scriptures, history and logic, the Sasana can only flourish if the members of the Sangha are sufficiently qualified in learning (pariyatti), practice (patipatti) and realisation (pativedha)—qualities that can best be cultivated when there is a mutually supportive and rewarding Sangha-laity relationship. When the founders of SBS set the long-term goal of producing properly trained monks to perpetuate the Sasana, they also understood the short-term needs of its community of lay supporters. This is reflected in its Objects and By-laws, where a subsidiary object [OBS 2 1.0(e)] is: to establish and operate a retreat centre as a means of providing community service to promote spiritual, mental and physical health.

This has also been considered in the Master Plan for SBS. The resident trainees are housed in kutis located in the more secluded spots among the brooks and valleys around the Sima Hall and communal facilities under Phase 3 construction. Bordering these kutis are forests and a beautiful stream where adventurous monastics can retreat to for greater connection with Mother Nature. When development of these areas are completed, they will be reserved for monastics only.

Near the main entrance gate of the sanctuary are located public and semi-public structures and buildings such as the Administrative Building, Dhamma Workers’ Quarters, Buddha Shrine, Deva Shrine, Abbot’s Office, Retreat Teacher’s kuti and Mahathera’s kuti. Other buildings and facilities under Phase 4 development will also be built in this zone: a Multi-purpose Hall, Guest Lodges and a Health Lodge.

The retreat centre will be utilising these facilities, which have been deliberately located away from the private monastic areas among the valleys below. We hope to out-source the management of the retreat centre to Buddhist professionals, who will arrange for competent teachers from various traditions to conduct courses throughout the year, or whenever in demand. In this way, the long-term goal of monk-training can be pursued independently and simultaneously with the short-term goal of community service. This has been our strategy since the beginning.

To date, however, local response to participate in the training programme at SBS has been poor, despite the availability of kutis for monastic trainees. Out of the seven newly completed kutis, only four are regularly occupied. The reasons may be varied, but one of them could be the on-going noise and activity of Phase 3 construction, which is also the main reason why we are not striving to recruit resident monastics for this vassa.

More foreigners have expressed interest in joining us, but being wary of the difficulties of getting visa extensions for them to complete their course of monastic training, we have had to turn them down. Nevertheless, many conscientious foreign monastics have stayed as visiting monks in the sanctuary since its inception.

In order to recruit potential monastic trainees for the sanctuary, I have often been urged by well-meaning Buddhist leaders to conduct short-term noviciate programs. Judging by the popularity of such programs nationwide, they feel that having one might just do the trick, or at least sow the seeds for the future. So, it looks like with the completion of Phase 3 by the end of 2003, we shall have to embark on another first: a two-week introduction to monkhood program. Eligible young men can then have a taste of the simplicity and quietude of Dhamma-vinaya study, meditation and monastic life “at the edge of the forest where the spring water flows”. Since this will be our maiden attempt, the intake will also be modest—perhaps not more than ten. So, if you are an adventurous young man who is physically fit, can effectively communicate in English, and is willing to try out an alternative lifestyle, be on the lookout for further details!

Some of our supporters have been clamouring for meditation retreats to be conducted here. So far, we have had good reason to decline because of the lack of proper facilities. Come end of 2003, however, such short-term needs of the laity may have to be addressed, especially if the number of monastic trainees for fulfilling our long-term goal does not increase.

In other words, what has been reserved exclusively for monastics may have to be temporarily shared with lay yogis until there is a significant change in circumstances. After all, our supporters do have a right to utilise the under-utilised facilities they have helped to sponsor and maintain.