Trudging along the long road to development 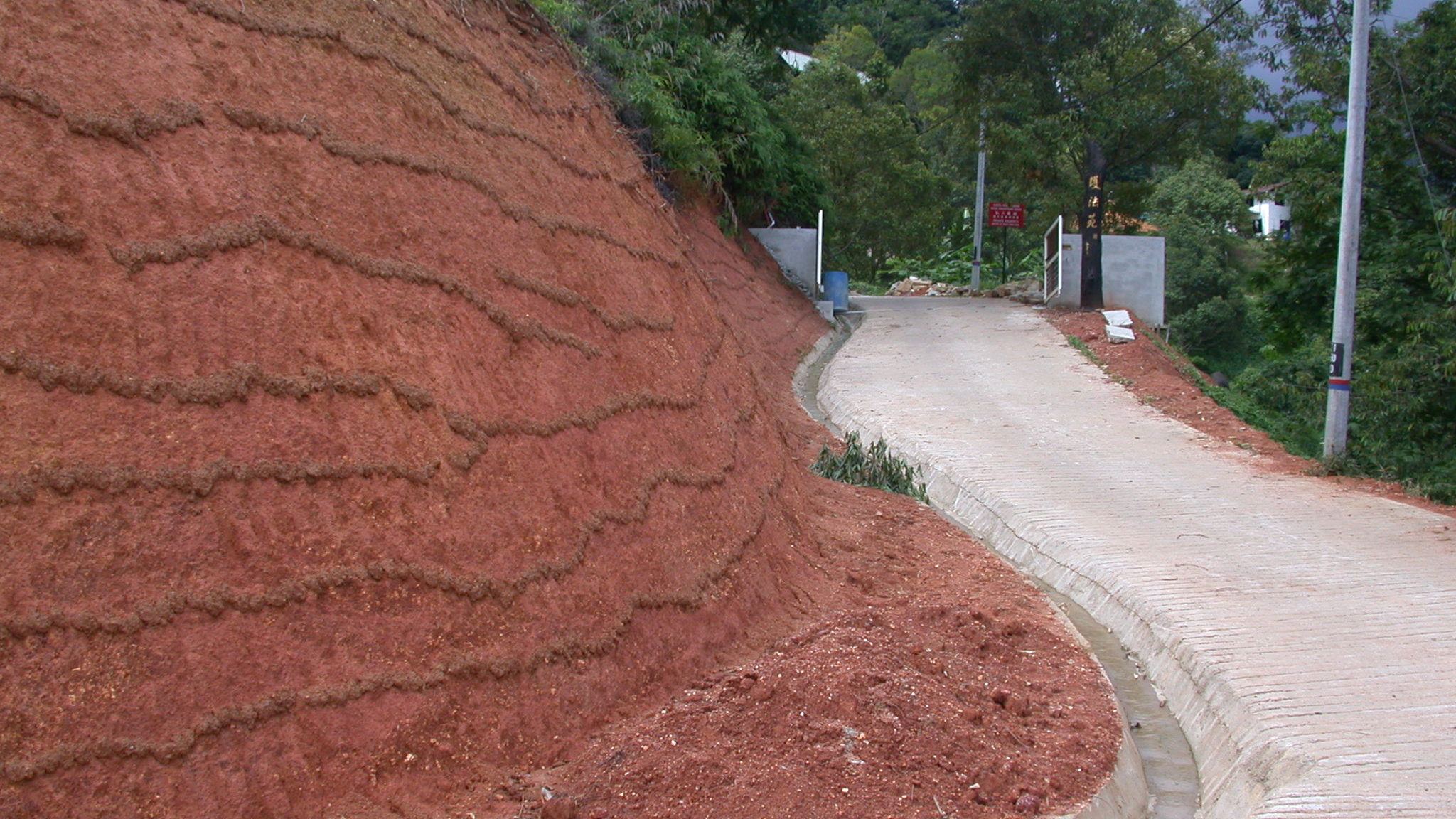 As the newly appointed Development Manager responsible for the physical development on SBS, may I firstly express my appreciation to TIMS General Committee for giving me this opportunity to serve.

My predecessors who have guided development before me have done a great job and this makes future development a lot easier. They have overcome obstacles in their way and it is now my responsibility to make sure the ‘figures stay in shape’ during my tenure on the job! Let us now trudge along the long road of development from where we stopped in the January issue of Sasanarakkha. In this past half year we concentrated mainly on putting the finishing touches to Phase 2 development as well as looked into certain safety aspects.

Erosion control, improvement on the road system, lightning protection, water quality, and road safety have been our primary focus. An open air Buddha Shrine with its open deck takes pride of place in our achievement these past five months.

EROSION CONTROL
One of the main principles guiding physical development in SBS is conservation of the natural environment. But in any building project there has to be excavations and the levelling of uneven terrain. This has aggravated existing problems of soil erosion and slope failure. So, like eating and sleeping, erosion control among the hilly terrain of SBS is an ongoing chore. Erosion control, improvement on the road system, lightning protection, water quality, and road safety have been our primary focus. An open air Buddha Shrine with its open deck takes pride of place in our achievement these past five months.

Landslide
Heavy rainfall after several weeks of dry weather caused a minor landslide on the slope in front of the existing site office. The slope had previously been trimmed, patched and planted with signal grass that had grown to more than a foot long. To prevent further erosion, the damaged slope was covered with plastic sheets for several weeks until we finally got a backhoe tractor driver willing to work on the treacherous terrain of SBS. The slope was eventually trimmed further, sacrificing a durian tree growing on it, and planted with signal grass seeds using the terra-control method.

Trimming of Slopes
Since we got the only backhoe in Taiping willing to work in SBS, we made full use of the opportunity to trim the neighbour’s slopes along our approach road, Jalan Sasanarakkha. Mr. KL Khor had repeatedly urged us to undertake the environmental responsibility of extending erosion control to the neighbour’s land as well, since our approach road passes through it.

Signal Grass
‘Kueh Kak’ Seng and his team followed up the operation by mud-slinging signal grass seeds onto the trimmed slopes, the height of which varied between 2-8 metres, and the length stretching for about 150 metres.

Turfing
Instead of buying lorry-loads of turf, we have been tapping the large expanse of mixed cowgrass within our premises to turf exposed areas on steep slopes, especially along newly constructed reinforced-concrete (r.c.) steps.

Drainage
After a complete facelift of the slope in front of the site office we are now ready to improve the earth drain at its foot with r.c. drains and sumps.

ROAD SYSTEM
Drainage and erosion control are primary considerations in the planning of the SBS road system because the concrete surface of roads and paths becomes a water course during torrential rain. This has been strictly adhered to in our designs.

Footpaths and Steps
To facilitate access to the kutis and other buildings a series of footpaths and steps were built. This included a flight of r.c. steps-cum-cascade drain from the Abbot’s Office to the site office.

Entrance Gate
At long last, we erected our main entrance gate with an automatic system. Authorised SBS personnel no longer have to stop their vehicles precariously on a steep slope in order to get down to unlock and open the gate. Now it’s just a beep away, within the convenience of one’s vehicle.

‘Kueh Kak’ Leong initiated the entrance pillar project to carve the Chinese characters of SBS on a handsome piece of weathered log (probably chengal mas) measuring about 4.5 metres high with an average diameter of 450mm. We managed to request local-born Ven. Chi Chern of the Taiping Buddhist Society, a renowned master of Chinese calligraphy, to write the characters and Ah Leong’s father-in-law, Tan Son Lai, to carve and gild them in gold.

And that’s not all. Ah Leong is committed to pave the surrounding area with granite slabs donated by former Development Manager Ooi Eng Huat, as well as to manufacture mock rock slabs with a natural finish to dress the entrance walls.

Widening Jalan Sasanarakkha
As the entrance gate is sited at a relatively steep stretch of Jalan Sasanarakkha, we took the opportunity to widen the road just before it by cutting into the neighbour’s land while the backhoe was trimming the slope. Fortunately, no durian trees were planted on that steep vacant portion of land. The existing drain will go underground when an r.c. slab is constructed over the widened area, enabling vehicles to wait for the gate to be opened, or to U-turn if entry is denied.

Road Signs
The completion of the entrance gate would require the putting up of road signs to forewarn unauthorised vehicles of the danger of stopping at a steep incline facing a locked gate.

Upgrading of Access Road
Drivers of lorries, 4WDs and other vehicles have long complained about that steep, treacherous stretch of dirt road between TNB spun poles #26 and #31. We tried to rectify the situation several times with gravel and soil, and finally with premix waste. Although the tar scrapings held the gravel together better than red soil, the MC decided that in the end it would be better to upgrade the road with reinforced concrete surface and proper drains. Now that the entry of unauthorised vehicles can be controlled with the entrance gate in operation, the reconstruction of the road is in progress.

ELECTRICITY AND TELECOMMUNICATION
Electrical Power supply and telecommunications have been in operation since May 2001. However, attacks from the scary thunderstorms over SBS have not ceased. They have taken their toll on the following equipment:
– 1 notebook adapter
– 2 circuit breakers (ELCBs)
– 1 cordless phone
– 1 refrigerator
– 1 washing machine
– 1 automatic gate fuse
– 1 telephone line surge arrestor
– 1 intercom line

Lightning Protection
Lightning strikes not only cost money for repairs and replacements; they also cause inconvenience. In our effort to solve this problem, we found out that the solution lay greatly on good earth grounding. SBS being sited on a rocky hill, the resistance of the ground here prevents electrical surges, such as those caused by lightning, to be diverted to the ground. Instead, they hit the electrical appliances.

After numerous tests, we found the better readings at the lowest area of SBS. A series of copper rods were driven into the ground and connected to one another. For added protection, earth grounding was extended to all available septic tanks as well. The earthing system comprises a network of stay wires, copper strips and earth wires connected to all buildings and electrical earth points.

Not only was equipment damaged, we also found that our circuit breakers tripped very frequently. That puzzled us for a long time. Sometimes, even when only faint thunder could be heard, some of our circuit breakers would trip. This was solved by Ir. BL Tan, who introduced a special lightning surge protector by Hager. According to him, surges do not necessarily come through the live wire only. They can also come through the earth wire. The protector works by blocking surges from the ground besides diverting surges from the live wire to the ground.

WATER SUPPLY
We thought rather smugly that we had been endowed with ample sources of water supply, until watering the plants during a dry spell proved us wrong. When the lower water tanks ran dry of water, air locks were created in the semi-empty water pipes; thus blocking the flow of water even if the upper tanks were to eventually fill up.

New Water Tank
The installation of an extra 600-gallon poly-tank on the hillslope above Agga Kuti alleviated the problem. But we still had to use water sparingly during a recent dry spell, when the lower spring dried up and the other two were just trickles of water

Sand Filter
Although the highest spring provided an additional source of water supply, it was not as clean as the middle spring. When Michael Woo came to inspect the springs in February 2002, he marvelled at the purity of the middle spring water collected in the r.c. tanks designed by him, which had not been cleaned for over 6 months. In contrast, the water collected from the highest spring was rather murky, especially after heavy rain. This prompted him to propose the installation of a sand filter to alleviate the problem. On 12 March 2002, the filter was installed, sponsored by Michael and friends.

FACILITIES DEVELOPMENT
After putting the finishing touches to the buildings under Phase 2 development, we continued with a few piece-meal projects that prevailing circumstances brought to our attention.

Dhamma Workers’ Quarters
In early February 2002, the Dhamma Workers’ Quarters was finally completed although it had been earlier occupied by yogis during SBS’s first meditation retreat held in December 2001. Since then more and more volunteer Dhamma workers have come to offer their services to the sanctuary. However, it’s for men only. When the guest lodge for ladies is eventually built, we can be sure of more volunteer workers!

New Kutis
Two new kutis, one sited behind the Abbot’s office and the other nearby the sima pond, were built under Phase 2 development. The future occupants of these two kutis would have to be special people with special kamma because they were constructed of special hardwood timber sent all the way from Sarawak.

Naming of Kutis
The SBSMC gave its Spiritual Director the honour of naming the kutis in Pali. The names were chosen so that they can be easily remembered by the man in the street; if not the Pali name, then at least the A, B, C:
– Agga Kuti
– Bodhi Kuti
– Caga Kuti
– Dhuta Kuti
– Ekagga Kuti
– Garu Kuti
– Hitesi Kuti

Carpark Area at Jalan Vicara
Trimming of the eroded slope in front of the site office produced much excess soil that had to be dumped in a convenient place nearby. The disused compost pit round the corner was just the ideal location. Our dream carpark for the Kembara and Land Rover materialised!

Bridge
Most of the Phase 1 kutis were built at the southeastern slopes of SBS, where a gurgling brook separates it from the rest of the sanctuary. During construction, a makeshift bridge of plywood and bakau trunks was used. Now we have a handsome, steel-frame wooden bridge with a long bench for the weary to sit on and let the spring waters sweep away troubling thoughts.

Open-deck at Buddha Shrine
Wesak Eve 2002 at SBS would not have been so glorious if the open-deck facing the Buddha image had not been completed in the nick of time.

Measuring over 9 metres by 7.6 metres and suspended over a footpath below, it seated over 100 people that night. A special design feature is provision made for the installation of two 15′ x 20′ canopies to keep out the sun and rain when required.

Phase 3 Development
Initial plans to continue with Phase 3 development after the completion of Phase 2 were unexpectedly shelved because of several reasons:

– Tender documents were not complete.
– Preliminary quotation given by the Phase 2 contractor was unacceptably high
– The Sangha wanted to have more time, peace and quietude for monk activities during the Rains retreat.

So Phase 3 development comprising Sangha Central Facilities, Library, Classroom, Publication and Meeting Rooms and Administrative Building can begin only after the vassa.