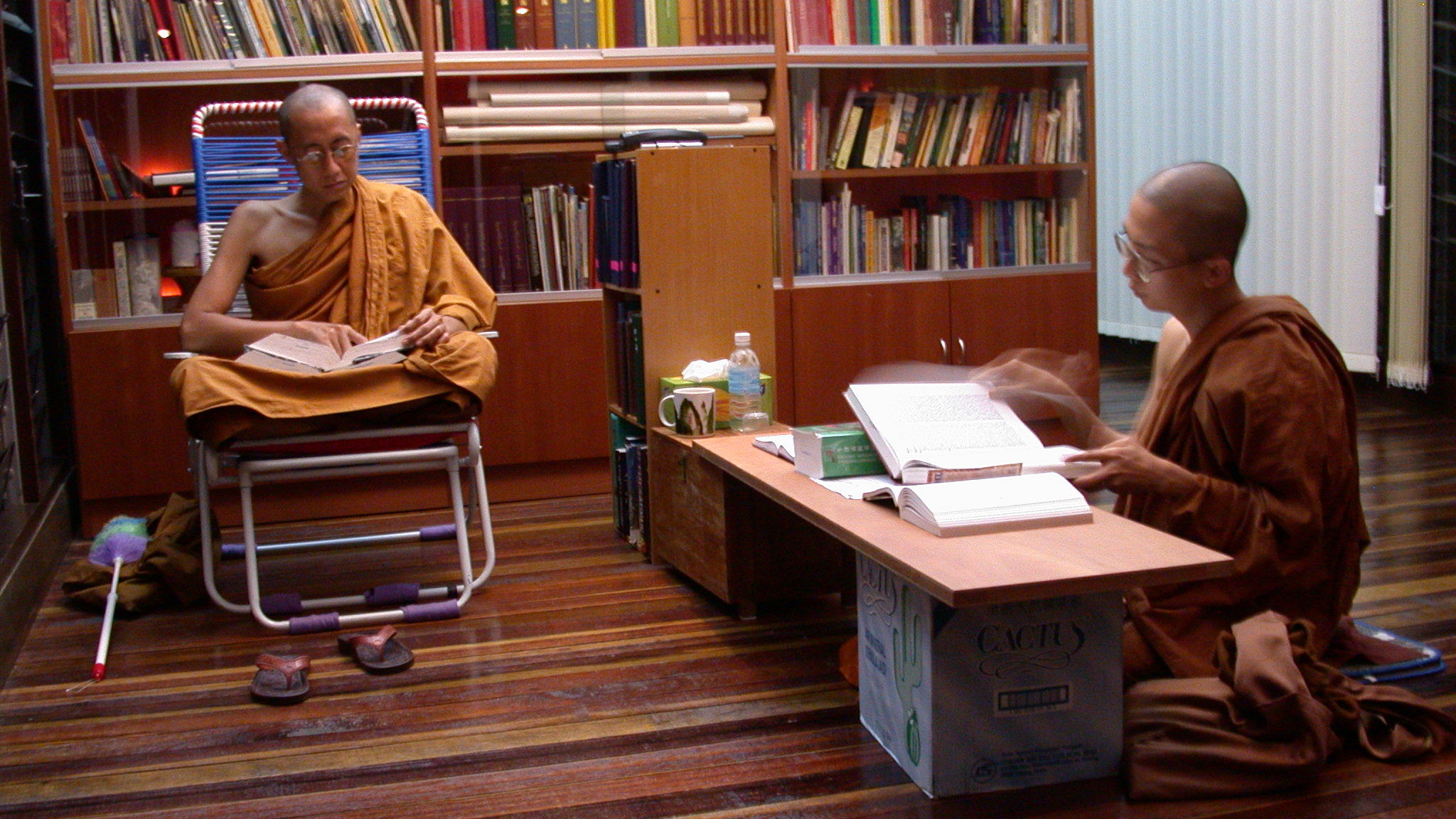 Bhante, when did you first set foot in SBS?
When I first stayed with Bhante Aggacitta, SBS wasn’t ready yet. That was about late January last year. We stayed at Khemarama. Later on, in early February, Bhante Aggacitta shifted to SBS to supervise the construction.

The first time I set foot in SBS was a few days after I had first arrived in Taiping, when I accompanied some Malaysian visiting monks for a visit. After that, I went up about once or twice a week to discuss Pali and Vinaya with Bhante.

I started staying here for long periods only after late June 2001. That was the time when we had our sima making ceremony.

What were your first impressions of SBS? And have they changed since then?
Well, experience had taught me not to be taken in by first impressions, as they tend to be wrong. So, I remember trying to suspend any judgement, though at first sight from across Sungai Tupai, it did look… well… okay.

Anyway, when I actually hiked up SBS with Bhante Aggacitta from Spritzer Mineral Water Factory (where we got our pindapata) for the first time, the ‘first impression’ that really stayed in my mind was that it was very, very steep. That wasn’t the right picture, though. We took a rather steep uncharted way up after wading through the stream. No one walks there now. I certainly wouldn’t want to!

Actually, I thought SBS had a serene atmosphere, most ideal for people who like quietude. Now, I still think it is such a place.

Since your arrival in SBS, have you ever encountered any significant problems?
None that I can think of, except perhaps a ‘mousy’ problem in my kuti. Still can’t manage to outsmart the two mice that come gnawing here and there. Trying to chase them away by banging where they’re gnawing would only make them angrier, and they’d start gnawing at various places for no apparent purpose. Bhante asked me to radiate metta, which I did, but it seemed to work just for a few seconds. After that, they’d go back to their gnawing. I’ll have to come up with better strategies.

What are your plans for the future? Would you consider making SBS your permanent residence?
If by ‘permanent’ you mean ‘long-term’, yes. It’ll take some years for me to be properly equipped as a monk. After that, I don’t think it would be fair to leave without taking on some teaching duties in return. So, I suppose you could expect me to be here for quite a long while.

Nonetheless, I do intend to take some months off in between for ‘sabbatical’ meditation retreats.

Presently the infrastructure at the sanctuary has been completed to a great extent, but our local monks who are eligible are not coming forward to participate in SBS’s training programme. Can Bhante explain the reasons for such a response?
I don’t think it’s accurate to say that none are coming forward at all. There’ve been a few who came and stayed and even participated in our classes, but they have left for different reasons. I believe a couple of them may return later.

I think what you’re saying is that the response is poor, considering the grand total enrolment of one monk.

Why is the response poor? I’ve a few ideas about that based on my interactions with some monks who have been here.
First of all, some monks say that they prefer to just meditate. They believe that meditation practice should be done in an intensive retreat. SBS is not a suitable place for intensive meditation because it is a monks’ training centre requiring students to do Vinaya studies as well as attend to other monkish duties.

Then a number of them admitted that they have no interest in learning the Vinaya in detail. Quite a few believe that it is adequate to just follow the norm of whichever monastic community they are in.

Another reason is that some monks prefer to move from place to place. This was quite a common practice during the Buddha’s time. However, based on the rules, I think it was a case of students following the teacher, or travelling in search of a qualified teacher. Another possible situation is that the monk has fulfilled the minimum prerequisites of independence and is therefore “licensed” to go on his own. It’s somewhat sad to see that many Malaysian monks seem to travel all over on their own even when they have yet to qualify. I think that’s rather detrimental to the strength of the Sangha in Malaysia.

I see. Actually I was expecting more practical reasons, like not being able to adapt physically to the lifestyle here.
Well there are some monks who shy away from SBS because of the expectation here to practise some dhutangas (ascetic practices). I must admit that I too felt somewhat intimidated by it as it did sound tough. However, after observing the practice for some time, they don’t seem that difficult after all. Obviously, it was a case of false perception.

Practising dhutanga has its advantages and is much encouraged here, but it is not insisted upon without due consideration for individual capacity. If a monk has a certain health problem that makes a certain practice unsuitable, he is free to set it aside until such a time when he has gained back his health. We don’t torture monks here.

Another thing is the demand on fitness. I remember a visiting monk candidly telling me that he couldn’t manage the daily hike for pindapata. I must say that it was certainly quite demanding earlier on. But since we shifted our pindapata venue to the Hokkien cemetery and started going down through a shortcut, it’s easier now. Going down takes less than half an hour, and coming up about 45 minutes. It shouldn’t be too difficult for a person of average fitness. Besides, we usually make some adjustments for monks who are not used to it.

Has there been any complaint about the overall atmosphere at SBS?
Yes. Some say this place is somewhat noisy because of the ongoing construction works. A monastic residence should of course be ideally quiet, but I suppose it’s something we have to live with for the time being. Actually, one tends to get used to the noise after a while. Besides, the noise is not there all the time. It’s rather peaceful off working hours.

All these reasons, which Bhante has just mentioned, appear to be quite lame on the surface. I think with such a qualified teacher as Bhante Aggacitta here, these reasons shouldn’t deter them from coming; don’t you think so?
I agree but I don’t think my opinion would make any difference here. One reason I’ve heard quite recently was Bhante Aggacitta was too busy with worldly duties, such as supervising the construction and attending to administrative matters. Actually, despite having to do all those things he still finds time to teach. We’ve been having classes almost every day.

Bhante, what are the areas that you would recommend looking into to boost the intake of trainee monks and postulants at SBS?
I’ve given quite some thoughts to this issue. It’s an important issue for me, because if no other monks were to be trained here other than me, I can be accused of being a very expensive monk to train.

I’m not sure what the committee can or should do, but for us monks, there seems to be just one proper thing to do: be good monks. To me, that seems to be the only way to attract good monks here.

What’s your advice to our young Malaysian monks and those potential recruits out there?
I suggest that they choose their preceptors and mentors well. It’s the most important thing for them to do. Be discerning in evaluating whether such-and-such a monk has the qualifications to be a mentor. Does he behave well in accordance with the Dhamma-vinaya? Is he capable of teaching the Dhamma-vinaya? Bear in mind that it takes a discerning mind and a long period of observation to be certain of a person’s true character.

As the Buddha had made quite clear, the whole of this holy life depends on right association. So, be a bit fussy. Choose carefully.

If any of them thinks of coming here, I suggest that he doesn’t listen to what other people say about this place—good or bad. Just come and see it for yourself.