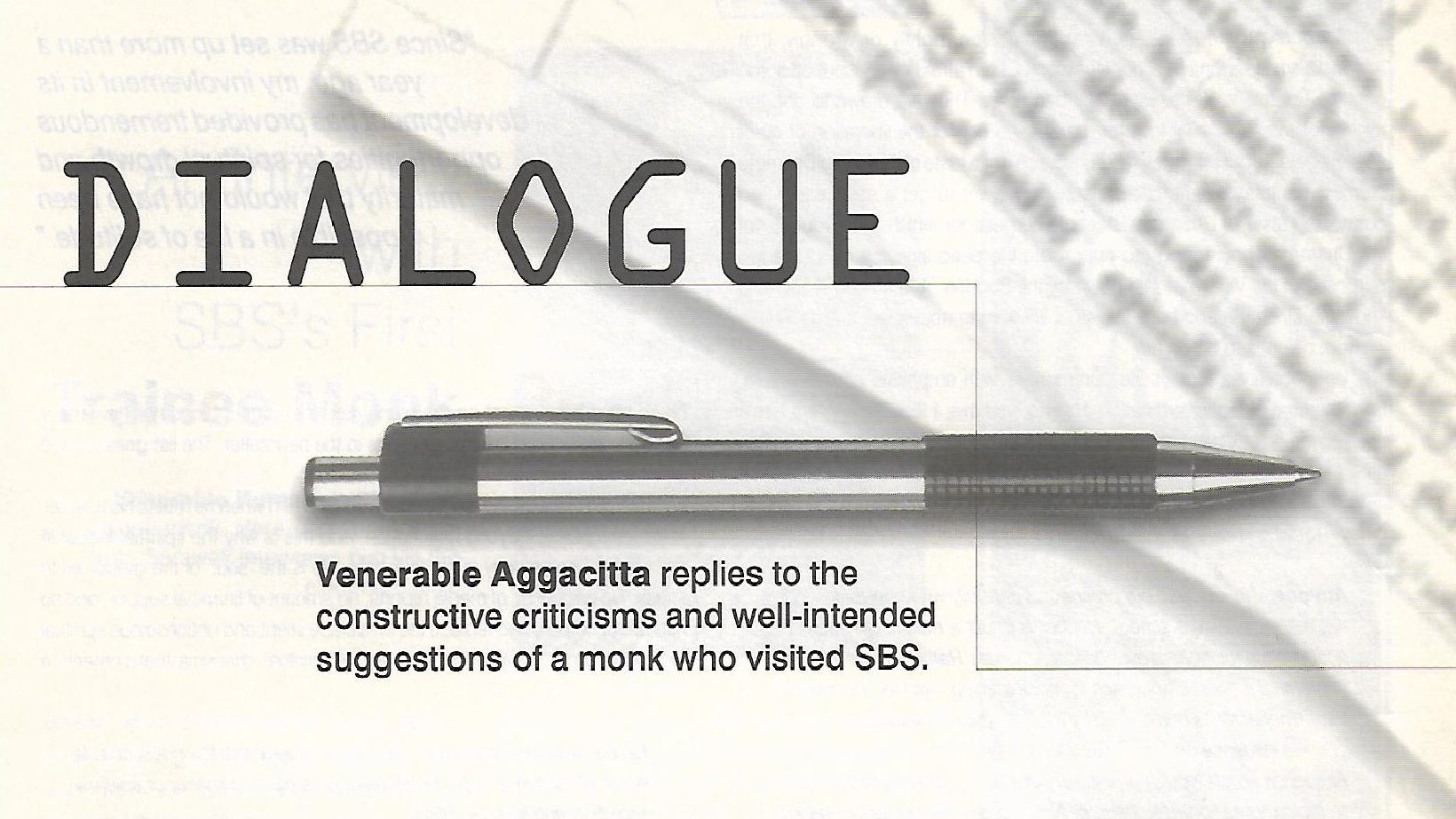 Venerable Aggacitta replies to the constructive criticisms and well-intended suggestions of a monk who visited SBS.

I heard Sasanarakkha does not accept non-Malaysian monks. Is this a misrepresentation of Bhante’s words? As I understand Bhante to be a very open-minded and helpful person, it seems unlikely that Bhante would set forth such a policy. It would be good if this issue is properly clarified to the Buddhist community to avoid further adverse effects on the growth of Sāsanārakkha。

So far, several foreign monks have stayed in the sanctuary. They include Venerables Vajiravamsa (Sri Lankan), Sumangalo (New Zealander), Vajiro (English), Dhammajoti (Singaporean), Virajo (American), and Dhammarakkhita (Australian). Venerable Ajahn Sumedho (from Amaravati, UK) has been invited to stay in Sāsanārakkha when he comes to Malaysia in July. The Objects and By-laws of the sanctuary provide for conscientious foreign monks to be accommodated as visitors for a period determined by the Abbot and Management Committee. This will depend on the availability of lodging and other factors.

Bearing in mind Bhante’s difficulty in implementing the ideals of Sāsanārakkha, I do not want to offer empty sympathy, as I am not able to offer any practical help. But I do sincerely wish for the success of any noble endeavour. Knowing that Bhante is quite engrossed in administrative work, I would like to share some of my thoughts as a silent observer.

Thank you for your good wishes and sharing.

First of all, I think the publicity Sāsanārakkha has received and is receiving is not very encouraging for any recluse or potential recluse who wants to join it. The expectation is not very helpful. Monks need to grow freely in the Dhamma. The promises to the community, expressed or implied, give one the impression that one’s direction of growth is somewhat predetermined externally, though this may not and should not be the case. Suppose there is a monk who dreams of serving somewhere other than Malaysia, will he be defeating the expectations of the Malaysian supporters who support Sāsanārakkha? Suppose there is a monk who wishes to live a life that is very much in keeping with the Dhamma but at the same time is different from the expectations of SBS. Will he feel the pressure—an obligation to repay with his service in the future—when he makes use of the facilities here?

Our expectations, at the basic level, are similar to the frequent injunctions of our Blessed One:
1. Be restrained according to the vinaya rules, seeing danger in the slightest fault
2. Practise sense-restraint by carefully guarding the 6 sense-doors
3. Resort to physical seclusion for the practice of meditation
4. Teaching what we have learned and practised to fellow monastics (AN 4.160) and to lay supporters (DN 31) out of compassion.

Gratitude is one of the moral virtues often preached by our Blessed One. In Sigalovada Sutta (DN 31) he clearly explained the mutually supportive relationship between the Sangha and its lay supporters. The lay supporters’ gift of freedom from secular affairs—made possible by faithfully providing bhikkhus with the material requisites of life—has to be reciprocated by the gift of the Dhamma, which is two-fold: by example or precept, or both.

Foremost is the example of an ideal bhikkhu who is morally disciplined, sensually restrained, mindful, contented, solitary and meditative. Such a one reflects the Sangha that practises well and is therefore worthy of reverence and offerings. Such a one is also “the incomparable field of merit for the world.” That would be the type of reciprocation required in terms of setting a good example so that “those who are not yet pleased will be pleased and those who are pleased will increase in number.”
The other form of reciprocation, which is less introverted and more “socially engaged”, is sharing the Dhamma with the lay supporters by radiating loving-kindness, giving moral guidance, teaching, discussion, etc.

Ideally all good monks, whether at SBS or elsewhere, should “pay” for their sponsored requisites by giving gifts of the Dhamma according to their preferences. I think Malaysians would prefer competent Malaysian monks to teach and guide them. However, lay devotees should also be advised by competent Dhamma teachers to accept the workings of kammic affinity with sympathetic joy (mudita) or at least with equanimity (upekkha).

Secondly, there is this general impression, rightly or wrongly, that Sāsanārakkha is a Vinaya-school for monks. I am afraid this will put off some genuine spiritual seekers, especially beginners. They are drawn to don the robes not (as yet) out of love for the Sāsanā nor for the liberation of other sentient beings, but rather for self-purification; for a taste of the Noble Dhamma themselves. It is difficult for a person who is yet to get a satisfactory and convincing taste of Dhamma—the sole purpose for which the Buddhas set the Dhamma wheel rolling—to appreciate the deep significance of the ten purposes of the Vinaya as laid down by the Buddha. And among those who know the Dhamma and have sufficient wisdom to appreciate it, true Vinaya wisdom belongs to only a few.

Undoubtedly a monk’s life commences with emphasis on the Vinaya, from the time of higher ordination. Having said this, I also think that a basic understanding of Vinaya that is directly relevant to his daily life is enough. This area of the Vinaya is not at all sophisticated when he leads a simple life. With this practical Vinaya knowledge, he can plunge into the Dhamma without much delay—for who knows when he will die?

Anyone who has read our prospectus carefully will know that SBS is not merely a Vinaya school. Neither is it just a meditation ‘factory’, academic institution, or evangelical seminary. Rather we are trying to implement a holistic approach to monk training, inspired by modern forest monasteries and guided by the Pali scriptural tradition.

We influence and are influenced by the environment around us. All caring parents would know the importance of applying this principle to their impressionable children. Newly ordained monks are as impressionable as children. They usually conform to the behavioural norms around them.

The Vinaya may be classified into three broad areas of focus: training for individual development, regulations for harmonious communal life and Sangha-laity relations. At SBS we try to maintain a high standard of Vinaya discipline, in theory and especially in practice, so that we can grow and prosper in the Dhamma individually and as a community, as declared by the Blessed One (DN 16).

At the same time, SBS monks are also encouraged to be restrained and mindful throughout the day; to practise formal meditation during their free time, especially when it is dark; and to take care of their physical health by exercising regularly. They will also be urged to participate in full-time meditation retreats at appropriate times.

I know Bhante to be both a monk of Vinaya and a man of Dhamma. But does the public or our target community know it? It is important that people correctly understand Bhante to be not only a trainer of monks in Vinaya, but a ‘complete’ monk—a good human being, a man on the path to holiness, indeed towards sainthood—as well. Then only can they appreciate Bhante’s concern for the Vinaya and the Sasana.

Thank you for the compliment. I have declined several requests to conduct meditation retreats for fear of being distracted from the primary objectives of SBS. As you know, there is a great demand for meditation guidance throughout the country. If I were busily engaged in conducting retreats here and there, how should I find the time to train the monastics at SBS? At least some local monks are interested in teaching Dhamma or meditation or both. Are there many—or any others—interested in giving holistic monk training?

Thirdly is my personal concern for Bhante’s well-being. It is a common phenomenon in any newly grown spiritual community that the leader becomes bogged down with so many diversified concerns that he neglects himself. When this happens, SBS will be found wanting. For a potential student who seeks a competent teacher, what is important is not how many people shower love (whether they know how or not) on the teacher, or how much money has been contributed to build his kuti. Neither is it important how many working hours have been spent on the plants and the surroundings nor how many people have noticed his photographs in the newsletter. The list goes on and on.

What matters is the confidence that arises in him when he meets his teacher. This is something beyond description. And this is why the spiritual leader in any spiritual community is so important. He is the ‘soul’ of the group, so to speak. No frequency of media reports, no amount of financial support and no number of helpers can replace the invaluable silent and unconscious spiritual radiation from a spiritual leader. It is this spiritual charisma that cements a solid core.

I appreciate your observation. However, I believe that the indescribable surge of faith in a pupil for his teacher is much a matter of spiritual sensitivity and kammic affinity.

Does a leader allow himself to be burdened with miscellaneous community matters beyond proportion? Does he have time to meditate sufficiently everyday? Is he burnt out unnecessarily to the point of losing mental poise and spiritual equilibrium and even becomes restless?

Let the grass remain untrimmed, let the flowers remain unattended, let the phone remain unanswered, if need be. Take a spiritual rest, Bhante. Of all the relevant factors for the healthy growth of Sāsanārakkha, Bhante alone counts most.

Thank you for sharing your thoughts and concerns. I am deeply touched. I hope the Management Committee will seriously take note of this. However, please do be careful. Both the critic and the criticised should know their own limitations; for it is easy to pass judgement on another based on one’s own yardstick and limited perspective.

Venerable Ajahn Brahm told me that it took him more than 15 years of total involvement in all aspects of developing Bodhinyana Monastery, Western Australia, before he could afford to go on a 6-month meditation retreat in solitude. I have enjoyed 10 years of ‘socially disengaged’ solitude, studying and practising the Dhamma. Since SBS was set up more than a year ago, my involvement in its development has provided tremendous opportunities for spiritual growth and maturity that would not have been possible in a life of solitude. I personally find the experience rewarding and a complementary part of spiritual practice, to be balanced by periodic meditation retreats at appropriate times. Owing to the overwhelming support of Malaysian devotees, the physical development of Sasanarakkha Buddhist Sanctuary is progressing at a phenomenal rate. It may take just 5 years or even less for me to follow Ajahn Brahm’s footsteps!

I hope I have not gone too far. I see the need for Sāsanārakkha. I see the worth of Bhante’s service in Malaysia. I, and all other well-wishers of the Buddha Sāsanā, long to see the success of the recluse ‘factory’—if at all a ‘factory’ is possible in this field.

May all be well, happy and peaceful.