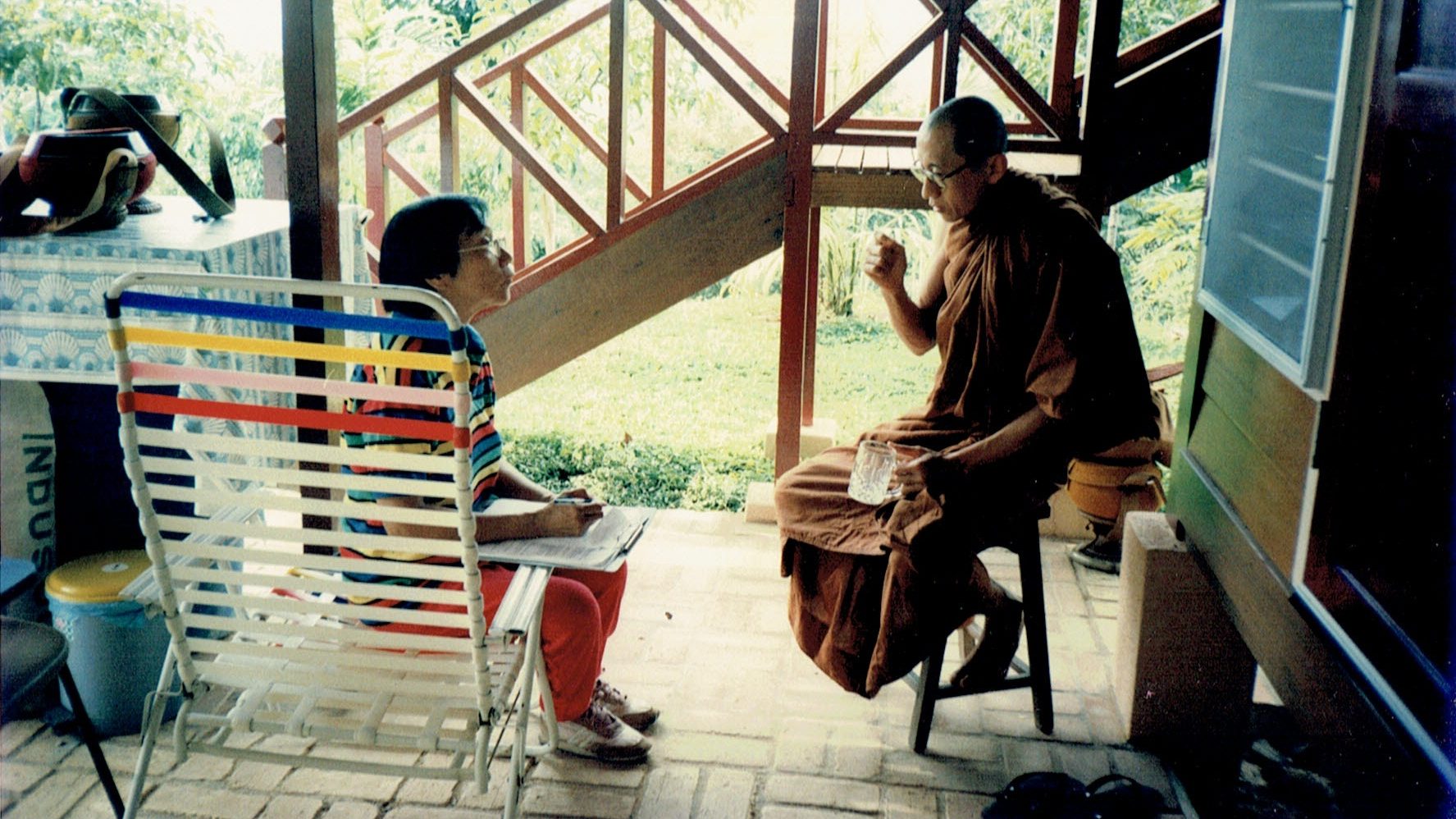 Tan Joo Lan, our video producer, tells you of her visits to ‘shoot’ footage for her next video production on SBS.

Following the current practice of movies and their sequels, the chronicling of SBS is to continue in a sequel, Shaping The Future Now Part II. After our first recording and subsequent issue of Shaping The Future Now—a VCD on why SBS was conceptualized and how it was launched, we now move on to record the what—what developments have taken place since then. We also plan to show you more of the how—how the members and lay devotees involved in the progressive development of the site contribute their time and effort in their different but significant ways.

Our plan is to gather video footage of the what and the how of SBS development and then put them together in a second video at year’s end or after the official opening ceremony.

The first event we put on tape was the ceremony for the demarcation and declaration of Sasanarakkha Sima held on 30 June and 1 July 2001. We arrived at Taiping in the late afternoon of Friday, 29 June. After checking in at the hotel, we went to the premises of TIMS to catch a 4WD up to the site to see in advance what would be happening on 30 June and 1 July.

Since the cameras could handle the waning light, we covered the arrival of those monks who were arriving late. Fifteen monks from different centres and monasteries in Kedah, Penang, Perak, Selangor, Johor and Sarawak had been invited to participate in the 2-day long ceremony. Joining them would be Ven. Aggacitta, the abbot of SBS, and Ven. Kumara, its first resident monk.

We were told that Saturday, 30 June was the ceremony when the monks chant Pali verses to abolish former simas that could possibly have existed on this site. Sunday, 1 July, would be the actual demarcation and declaration ceremony. We woke before dawn on Saturday morning to catch the first in a series of to-s and fro-s of a number of 4WDs plying the hill to the top and down.

After shooting the morning dana, we quickly went down to the water sima site to get a vantage point for the cameras worked by Bala and Soo Jin. It was intriguing to see the monks slowly cover every square foot of the space to thoroughly “cleanse” the site. We waited to see how the monks would maintain their balance on the sloping area covered with loose stones and pebbles. They solved the problem by each squatting in his allocated square of ground. In order to thoroughly cover every inch, the monks “cleansed” the area twice—once in the morning and again in the afternoon—standing in three different formations while they were chanting.

We covered the morning session and returned at night to video the discussion on controversial issues about water sima. These included identification of sima boundaries, types of allowable boundary markers, maximum extent of the sima and times for chanting—based on references from the Vinaya books. The discussion was conducted in English and Hokkien.

1 July was the demarcation ceremony. Members of the Buddhist community from all over Malaysia were here. There were also a number from Singapore and Australia. It was a heart-warming scene—old people, young people, men, women and children had come to witness the event. Lay people, members of the SBS committee and the professionals who had contributed and are contributing their skills and expertise in the physical development of the sanctuary, also participated. They were positioned around an octagonal area marked out with stones to establish the 8 major compass directions, within the area that had been “cleansed” during the previous day’s ceremony.

In reply to a question by the monk conducting the ceremony, each replied that the boundary marker for his direction was a rock. When lunch was over droves of people queued up to be ferried down in the 4WDs. We owed our mobility to Ah Eng and the very well-organized transportation committee.We were impressed to see that the overgrown paths leading to the water sima site had become neat, cemented little roads, lined with lush grassy green banks. However a number of hairpin bends and the very steep gradient made plying back and forth a huffing and puffing affair.

Kudos to the TIMS members and other volunteers who, in the early days, trudged up and down all over SBS without a joint out of order.The existence of the green grass banks has a little story to itself (see p.14). When you next walk the steep paths of SBS and enjoy the sight of lush grass-covered slopes, remember the days of toil and dedication of Ah Seng and Ah Soon.

To capture Ah Seng and his brother at their task on video, we made another trip to Taiping on 13 August 2001. Before going up to SBS we wanted to put into the can an establishing shot—of SBS taken from afar. For that, we went up first to Khemarama, Ven. Aggacitta’s former dwelling on another small hill. As usual, Ah Eng ferried us up. It was cloudy and a haze hung over the valley. We waited for the sun to come out. We taped down a few seconds even though the sun did not come out. We would have to return for another attempt to get a good shot.

As we prepared to return to the 4WD, we smelt the aroma of… aha… durians! While we had been busy filming, Ah Eng had been busy durian hunting and had collected some fallen ones. They were very good! Sow Fei claimed with feeling that the orange flesh of a particular fruit that delivered a rich, creamy texture was the best she had ever had.

The next day, after covering the pindapata at the Spritzer Mineral Water Factory, we went up to SBS. We noted that the steps leading up to the Abbot’s vihara have been cemented over. The steel structure of the sima pavilion was up. Four kutis are on their way to being completed.

We also shot Ah Seng, Ah Soon and Ah Leong in action. We tried our hand at hurling some handfuls of the gooey mixture. We were satisfied with the footage we had in the can, and even more satisfied when another lot of durians that had been collected was opened. Ah, another taste of the marvellous durians, this time from SBS!

Unless we know of other happenings, the next time we go up would be to cover the Kathina on 18 November.