Not Just Any Stupa 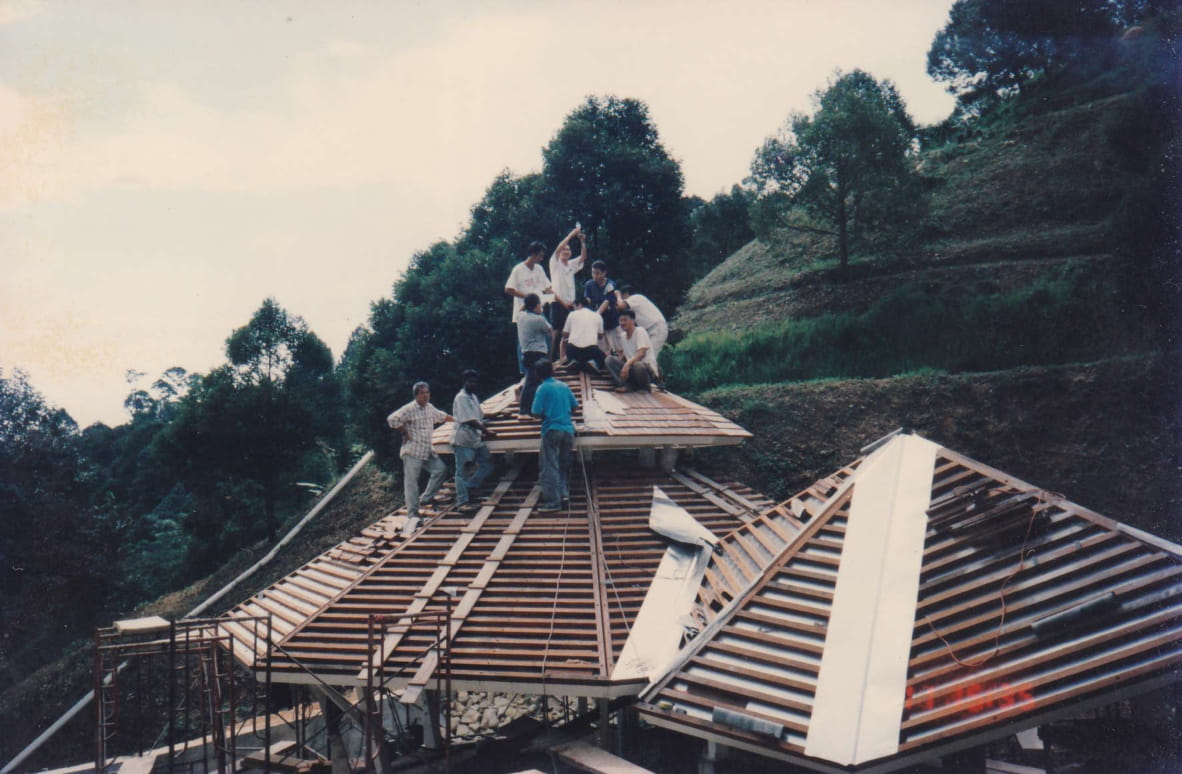 A stupa that’s distinctly Malaysia in flair and flavour was installed to crown the sima pavillion. Ven. Kumara Bhikkhu relates the circumstances of the installation.

Today, 11 October 2001 shall go down in the annals of Sasanarakkha Buddhist Sanctuary as another day of great signi-ficance. Here, a stupa was installed: not just any stupa, but one that is distinctively Malaysian in spirit and flavour. You could call it a Malaysian stupa, as it was designed in Malaysia by Malaysians, and you would certainly not be able to find anything like it anywhere in the world.

The bronze stupa had arrived at the Abbot’s Office from Bangkok just yesterday night. The casting was jointly sponsored by Mrs. AK Wong of Bandar Utama Buddhist Society, Hor Tuck Loon of Sukhi Hotu, his wife, Chan Lai Fun and their friends. Mrs. Wong also sponsored the cost of making the miniature prototype stupa, whereas Lim Poh Chuan and his wife, Grace, who is a member of Taiping Insight Meditation Society, made the arrangements to have the actual stupa cast in Bangkok and transported here.

A few days before the arrival of the stupa, there were concerns about it not arriving in time for the appointed date. Poh Chuan’s telegraphic transfer took much longer than he expected to reach the maker, who would not release the stupa until the money actually reached his hands. Personally, I was sceptical of it reaching on time. It’s okay, I thought. In fact, what’s the big deal? We could easily postpone the ceremony, which wasn’t widely publicised anyway.However, Ven. Aggacitta insisted that the chosen date was “a good day”.

An idea spontaneously came to him. He asked that the help of Tan Bee Chin be sought, knowing that she had some affluent contacts in Bangkok who could help. And he was right. The money was quickly paid, the stupa was soon on its way to the Sanctuary, and I stood corrected. It must have been a very good day.

The fact that the stupa was safely in the Sanctuary didn’t mean that we could just fix it on the roof of the sima pavilion. Another step of preparation was necessary. This was to saw a piece of hardwood into an octagonal shape that could fit exactly inside the base of the stupa, so that it could be firmly secured onto the roof.We had the piece of wood, but we didn’t have much time.

The ceremony was scheduled for about 2.30pm that afternoon. Again, this was no obstacle. All it took was to have Tan Chong Sim, who has been a helpful supporter, to give a call to his friend, the boss of Soon Lek Furniture. He responded to our call. It was amazing that the boss willingly got it done at such short notice, and just in time for the stupa installation ceremony. Why not? It was a good day.

The piece of hardwood was certainly no less extraordinary. It was sawn from a block of belian, which is reputed to be the hardest species of wood in the world, gladly sponsored by Teresa Jong of Sarawak. The hardwood is so hard that it is naturally immune to termite attacks. I was told that such a block of belian is rare due to its larger than usual width.

Furthermore, it was a family heirloom given to Teresa by her father. The woodblock had been earlier transported from Sarawak together with sawn timber, also sponsored by Teresa, meant as building material for the sima pavilion. As the event was not widely publicised, the crowd was expectedly small—just about 50-70 people, mostly members of local Buddhist groups. They had obviously been informed merely by word of mouth.

Placing the stupa on the apex of the sima pavilion roof was not an easy task as the roof was somewhat steep and the stupa about the weight of an average man: a hefty 58 kilogram. Neither was there any sort of machine to lift it up. It took the sheer human strength of devotees and construction workers—powered by devotion—to haul it in relay fashion up the roof and position it at the apex. A Herculean task indeed! Relics believed to be that of our Lord Buddha, his great disciples, and other arahants were placed inside the stupa. They had been given by various devotees, particularly Lim Tian Woh of Klang, who went to various places to collect them.

Besides that, devotees also placed crystals and other cherished items in it, thereby adding further weight to the already heavy stupa.While the stupa was being secured on the top of the sima pavilion, the monks, led by the Abbot, Ven. Aggacitta Bhikkhu, chanted a series of Pali verses specially selected for the occasion. As a mark of respect for the Buddha’s words, the devotees removed their foot-wear. While the monks chanted, a feathery drizzle descended from the sky, as if to bathe the newly installed Malaysian stupa.

Thoughtful devotees shaded the monks with umbrellas. It’s interesting to note that such a kind of drizzle had happened once before, that is, after the chanting at the SBS groundbreaking ceremony.The simple but significant ceremony ended with the Abbot leading the gathering in a sharing of merits.

Another landmark for SBS has been reached; another step towards its vision firmly taken; another piece of groundwork for a Malaysian Theravada Buddhist identity beautifully set in place.