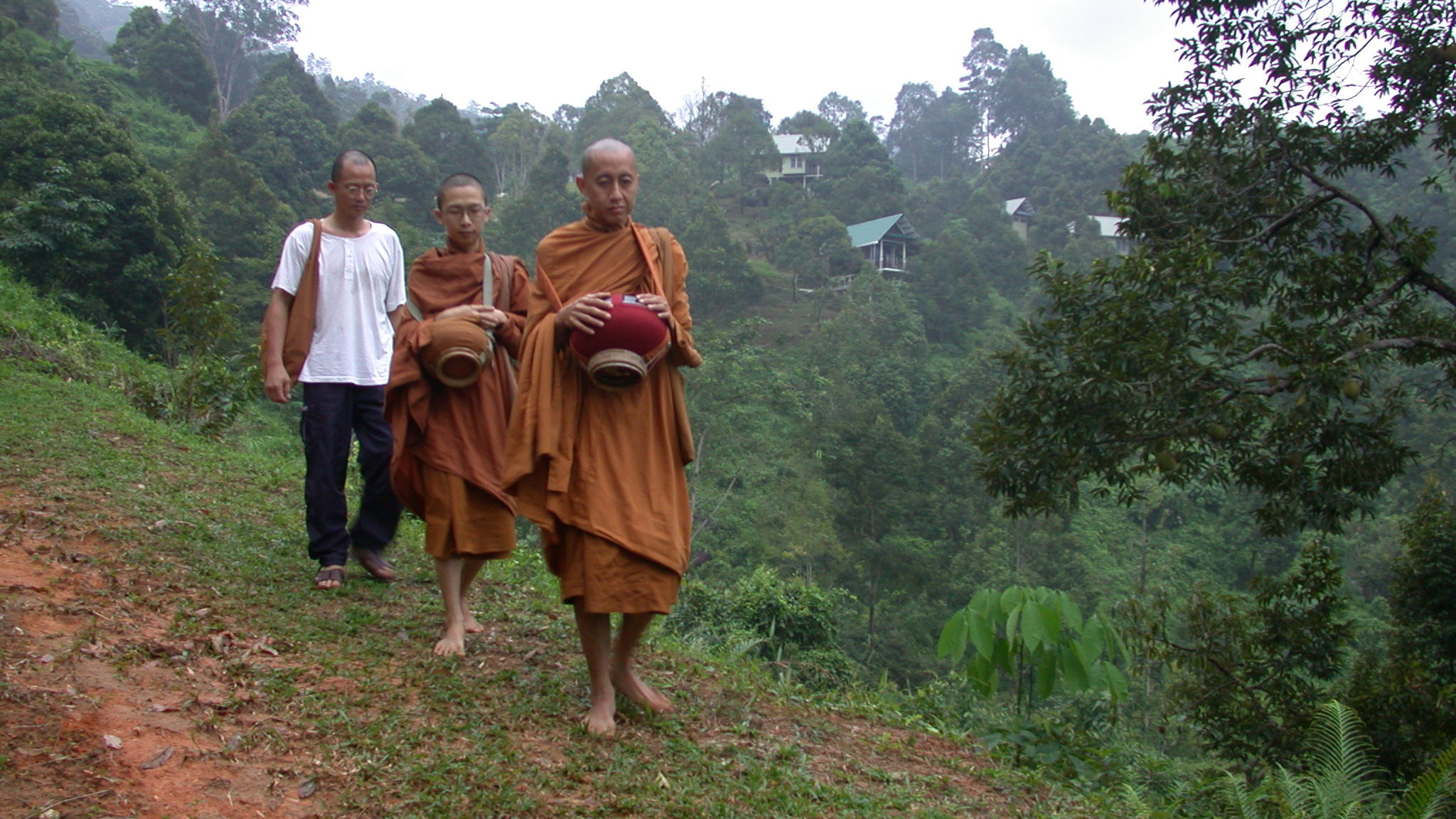 If you’re familiar with Thai wats, Sri Lankan temples and Burmese monasteries, you’d probably tick “none of the above” when you visit SBS. Built on stilts and hugging steep slopes, the kutis at SBS reflect a unique Malaysian identity. “Practical and beautiful. Certainly an award-winning design,” said an appreciative visitor from Subang Jaya Buddhist Association.

Q Jade Saw Architects has combined reinforced concrete, steel, timber, cemboard and PU-foam metal roofing to create com-fortable and practical living space within well-proportioned claddings. The relatively high roof, sliding doors and panels, as well as semi-open decks of the kutis are conducive to monastic life in a tropical environment. They are airy and cool dwellings that keep the heat at bay. Each kuti has its own roofed walkway, attached bathroom and built-in desk and cupboard. SBS monks can study and practise the Dhamma in self-contained seclusion.

Several persons have commented that the sima pavilion is reminiscent of our National Mosque. In the initial stages of design, I asked Jade if she had got her inspiration from the Bidayu Headhouse of Sarawak because I noticed some resemblance. Jade said that she didn’t even know what a headhouse was or how it looked.

“Your stupa on the sima roof is beautiful, but it reminds me of the dome of a mosque,” a staunch supporter commented candidly. A visitor to the newly completed vihara that houses my office-cum-library-cum reception area remarked, “This building is very nice, airy, modern and unique.” The designers had been briefed to come up with something Malaysian and the success of their creation is evident. To the observant, there is a distinct “Malaysian-ness” in the building design. SBS is certainly not a Thai wat, Sri Lankan temple or Burmese monastery.

This conscious evolution of a Malaysian Theravada Buddhist Identity is not only confined to physical development. SBS monks’ recitation of Pali passages for blessings and other special occasions will also sound unique to those who are ac-quainted with Thai, Sri Lankan or Burmese Pali chanting. Students of International Pali pronunciation will perhaps notice the attempt to standardise the accent and rhythm of the syllables so that harmonious and sonorous group recitation can be achieved.

In the process of reviving traditional monastic practices on the brink of extinction in Malaysia, SBS monks have also adapted to modern technology. To practically determine real noontime (which has significance in monastic life), we experimented with the use of a spirit level, magnetic compass, and mathematical instruments like the set-square, protractor and compass. Related data were also downloaded from the Internet to com-pare with our readings.

Formerly monks had to make and dye their own robes. Modern monks are so well supported by lay devotees that they have forgotten their humble roots. To remind them of their gratitude to their benefactors, SBS monks are required to go through the tedious process of making and dyeing their own robes at least once. Instead of hand sewing, they are taught the option of using sewing machines. Natural dyes were prescribed by the Buddha to match the allowable shades of robe colour. The production of such dyes is time-consuming and many of them fade or run after a few washings. It is educational for a monk to learn how to make such natural dyes and use them to dye his robes. However, for practical reasons we can use chemically dyed cloth to make robes and re-dye them with self-made dye. In SBS, we have found that a concoction of bakau bark and buah jering shells can produce reddish brown dye. Lately, during the construction of the water sima pavilion, we noticed that belian wood also gives reddish brown dye. When applied on a chemically dyed ochre cotton cloth, the result is a sombre brown colour. Thai forest monks use jackfruit pith while some Burmese monks use ficus bark or shells of ironwood fruits to make robe-dye. I was told that mahogany bark is used by some monks in Sri Lanka to make their dye.

In SBS’ first Kathina Ceremony, the monks perpetuated the ancient practice of communal participation in making and dyeing the kathina robe. This interesting attempt to conform to the scriptural tradition in a modern Malaysian context is graphically explained in my booklet, Kathina Then and Now, which was published for free distribution to commemorate the occasion.

Hiking down the slopes of a forest monastery and its surrounding hills for pindapata and climbing up again with a bowl full of almsfood is not only an age-old tradition of forest monks, but also good practice for physical and spiritual health. SBS monks have two routes to choose from: a longer cross-country hike through orchards, streams and jungle; or a shorter but steeper walk along the road to the coffee shops near the foothill.

These are some of the lanky first steps that SBS is taking towards the conscious evolution of a Malaysian Theravada Buddhist Identity. Malaysian youths who have been planning to take up the robes, as well as local monks desirous of practising in accordance with the scriptural tradition can now have the opportunity to join us for training in our own home territory.

SBS is not the dream of only one monk. It is a desideratum for all caring Theravada Buddhists, especially in Malaysia. Let us rally to make SBS a thriving centre for monastic training. So young men and venerable monks, please do come and join us to help vitalise the Sasana in our country.